Amtrak was carrying more than 140 people when several rail cars derailed moments after an engineer noticed a significant bend in a rail and applied the emergency brakes. 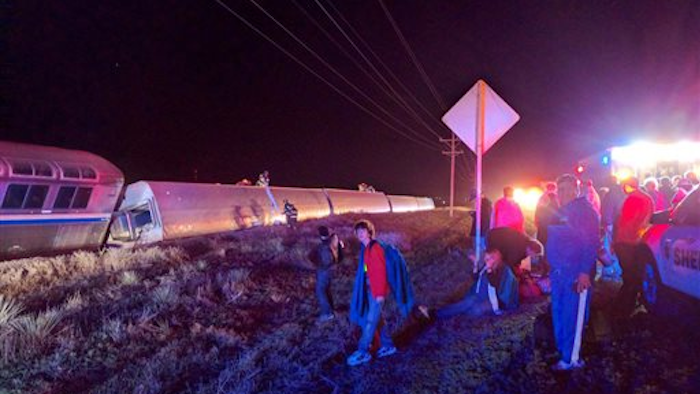 Passengers gather after a train derailed near Dodge City, Kan., Monday, March 14, 2016. An Amtrak statement says the train was traveling from Los Angeles to Chicago early Monday when it derailed just after midnight.
Daniel Szczerba via AP

Investigators looking into the derailment of an Amtrak passenger train in southwest Kansas will review rail conditions and other factors to determine the cause of the accident, a federal transportation official says.

Amtrak's Southwest Chief was carrying more than 140 people when several rail cars derailed early Monday, moments after an engineer noticed a significant bend in a rail and applied the emergency brakes, authorities said. At least 32 people were hurt, two of them critically.

Local authorities said they were checking whether a vehicle crash may have damaged the track before the accident.

National Transportation Safety Board member Earl Weener said Monday evening at a news conference that investigators would review data from cameras and recorders on the train as well as the condition of the rails and crew performance. He put the train's speed at the normal limit of 60 mph.

Weener said there was some initial indication of a "misalignment" on the rail, but it was unclear what that was or what caused it. He said the engineer was vigilant and noticed the variation on the track, causing him to brake. The track was inspected last week, Weener said.

The train, which had about 130 passengers and 14 crew members, was making a 43-hour journey from Los Angeles to Chicago when it derailed shortly after midnight along a straight stretch of tracks in flat farmland near Cimarron, a small community about 160 miles west of Wichita. Eight cars derailed, and four of them ended up on their sides.

Thirty-two people were taken to hospitals for treatment. Four of them remained hospitalized Monday night, including two people who were airlifted to Amarillo, Texas. The rest had been released.

The tracks run along Highway 50, which has no barrier that would prevent a vehicle from leaving the roadway and driving near or onto the tracks. The road and tracks are separated by a shallow depression.

Daniel Aiken, of Lenexa, Kansas, said he heard screaming as he climbed out of an overturned car. He stopped to smell a fluid that was flowing through the car, fearful that it was fuel, but was reassured when he realized it was water.

"Once people realized the train wasn't going to blow up, they calmed down," he said.

Visibility at the accident site was relatively clear at the time of the derailment.

Andy Williams, a spokesman for BNSF Railway, which owns the track, said the derailment was not caused by poorly maintained track. He said the track is inspected twice a week and meets Federal Railroad Administration guidelines.

The future of the Southwest Chief service — the only Amtrak route through Kansas, with stops at six cities — had been uncertain in recent years. Amtrak had warned it might stop or reroute the line because of disputes over who would pay to install safety technology, but officials reached a deal last year.

Taxpayers have thrown in tens of millions of dollars to improving parts of the rail line in Colorado and Kansas.

Update: Amtrak Engineer to Be Charged