The leak of waste Duke Energy stored after burning coal for power coated about 70 miles of a river. 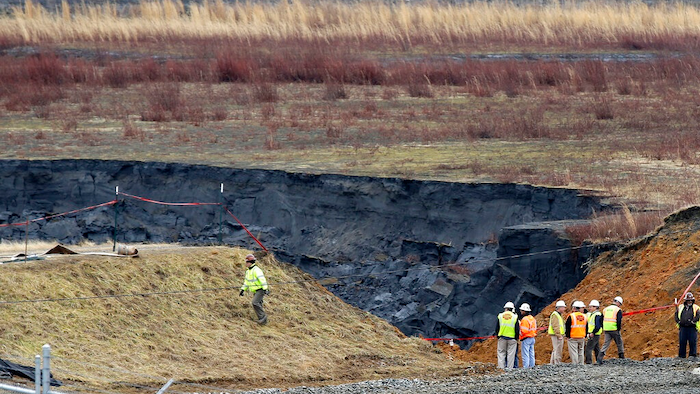 In a Wednesday, Feb. 5, 2014 file photo, Duke Energy engineers and contractors survey the site of a coal ash spill at the Dan River Power Plant in Eden, N.C. The federal, North Carolina and Virginia governments want a judge to declare Charlotte-based Duke Energy liable for environmental damage from a leak five years ago that left miles of a river shared by the two states coated in hazardous coal ash. Government lawyers on Thursday, July 18, 2019 sought to have Duke Energy declared responsible for harming fish, birds, amphibians and the bottom of the Dan River.
AP Photo/Gerry Broome, File

RALEIGH, N.C. (AP) — The federal, North Carolina and Virginia governments asked a court Thursday to declare the country's largest electricity company liable for environmental damage from a leak five years ago that left miles of a river shared by the two states coated in hazardous coal ash.

Government lawyers sought to have Charlotte-based Duke Energy declared responsible for harming fish, birds, amphibians and the Dan River bottom. Hazardous substances like arsenic and selenium poured into the river at levels high enough to harm aquatic life, according to a complaint filed in the North Carolina federal court district near the site of the 2014 disaster.

The leak of waste Duke Energy stored after burning coal for power coated about 70 miles (110 kilometers) of the river from a power plant near Eden, renewing national attention on the risks posed by similar storage pits across the country.

Duke Energy pleaded guilty to federal environmental crimes in 2015 and agreed to pay $102 million. The company said three years of testing through 2017 found no long-term effects to the river's environment.

The government's complaint "establishes beyond any doubt that the Dan River spill did serious harm," said Frank Holleman, an attorney at the Southern Environmental Law Center. "The two states and the United States government are pursuing money and compensation for that harm."

A tentative settlement also filed with the court for public review indicates the sides have agreed on the scope of the restoration needed.

Duke Energy already has paid to remove a defunct 1915 hydroelectric dam on the Pigg River in Virginia and added a boat dock and other improvements to a Danville, Virginia, park that was closed for months while coal ash was dredged from the river, the consent decree signed by the company and government officials said. The power company also bought 340 acres (138 hectares) in North Carolina and 214 acres (87 hectares) in Virginia along the Mayo River, which was then transferred to state parks in both states.

The restoration and plans for what remains left to do will be described in public meetings scheduled in the coming weeks, court documents said.

Since the Dan River spill, Duke Energy has been prodded by court orders and a new state law to excavate coal-ash pits at eight of its 14 North Carolina power plants, with the ash to be stored away from waterways.

But the company is fighting an order by state environmental regulators to also excavate its remaining six sites. Duke Energy had proposed covering some storage pits with a waterproof cap, saying that would prevent rain from passing through and carrying chemicals through the unlined bottoms and would provide a quicker and cheaper option.

Duke Energy contends the expanded excavation requirement could double its costs to about $10 billion and take up to 30 years to complete. State utilities regulators last year allowed the company to begin charging ratepayers the first $778 million chunk of cleanup costs.

Virginia and South Carolina had already ordered its major electric utilities to remove all their coal ash out of unlined storage.