Idaho Test Reactor is Pivotal to US Nuclear Power Strategy 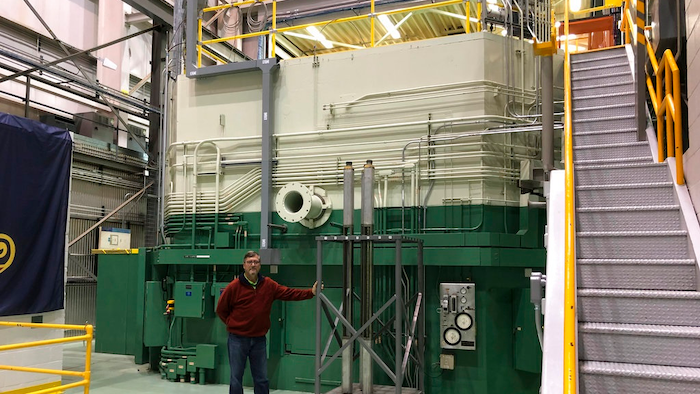 In this Nov. 29, 2018 photo, J.R. Biggs stands in front of the Transient Test Reactor he manages about 50 miles west of Idaho Falls, Idaho. The test reactor at the Idaho National Laboratory has been restarted to test nuclear fuels as the U.S. tries to revamp a fading nuclear power industry with safer fuel designs and a new generation of power plants.
AP Photo/Keith Riddler

The reactor at the U.S. Energy Department's Idaho National Laboratory has performed 10 tests on nuclear fuel since late last year.

"If we're going to have nuclear power in this country 20 or 30 years from now, it's going to be because of this reactor," said J.R. Biggs, standing in front of the Transient Test Reactor he manages that in short bursts can produce enough energy to power 14 million homes.

The reactor was used to run 6,604 tests from 1959 to 1994, when it was put on standby as the United States started turning away from nuclear power amid safety concerns.

Restarting it is part of a strategy to reduce U.S. greenhouse gas emissions by generating carbon-free electricity with nuclear power initiated under the Obama administration and continuing under the Trump administration, despite Trump's downplaying of global warming.

According to the U.S. Energy Information Administration, 98 nuclear reactors at 59 power plants produce about 20 percent of the nation's energy. Most of the reactors are decades old, and many are having a tough time competing economically with other forms of energy production, particularly cheaper gas-fired power plants.

Some nuclear plants have closed in recent years, and Illinois, New York and New Jersey have approved subsidies in the past two years to bail out commercial nuclear plants. Officials in some areas are considering carbon taxes on coal and natural gas to boost nuclear power.

Biggs said Japan's Fukushima nuclear disaster, caused by a 2011 earthquake and tsunami, was a primary reason U.S. officials restarted the test reactor in Idaho. The cores of three reactors at the Japan plant suffered meltdowns after cooling systems failed.

But what if, researchers say, nuclear plants produced energy with accident-tolerant fuels in reactors designed to safely shut themselves down in an emergency? That's where the Idaho lab's test reactor comes in.

Dan Wachs, who directs the lab's fuel safety research program, said only three other reactors with fuel testing abilities exist — in France, Japan and Kazakhstan. He said none can perform the range of experiments that can be done at the Idaho lab's Transient Test Reactor, also called TREAT.

"The world is suffering from a very acute shortage of testing that TREAT fills," he said.

At the Idaho test reactor, pencil-sized pieces of fuel rods supplied by commercial manufacturers are inserted into the reactor that can generate short, 20-gigawatt bursts of energy. Workers perform tests remotely from about half a mile (0.8 kilometers) away.

The strategy is to test the fuels under accident conditions, including controlled and contained meltdowns, to eventually create safer fuels.

The tiny fuel rods, including those that melt, are sent to the lab's Hot Fuel Examination Facility, where workers behind 4 feet (1.2 meters) of leaded glass examine them. Additional work is done a short walk away at the Irradiated Materials Characterization Lab, where powerful microscopes can examine the fuel at the atomic level.

Wachs and his team of about 15 scientists get the results and consult with both the fuel manufacturer and the Nuclear Regulatory Commission, which licenses nuclear fuel.

The 890-square-mile (2,300-square-kilometer) Energy Department site that holds the test reactor, about 50 miles (80 kilometers) west of Idaho Falls, also is the proposed location for an energy cooperative's small modular reactors. The small reactors are intended to be economically competitive and safer than current reactor designs. Because they're modular, additional reactors can be built as energy demands in a region increase, reducing initial construction costs.

While the Idaho lab looks to the future, the sprawling Energy Department site in Idaho's high desert sagebrush also contains some of the nation's nuclear past. The core from Pennsylvania's Three Mile Island nuclear plant was buried there after it underwent a partial meltdown in 1979 in one of the nation's worst nuclear mishaps.

The Three Mile Island facility still produces energy, but its owner has said it will shut it down in 2019 unless Pennsylvania comes to its financial rescue.

Besides economics and safety, another problem for nuclear energy is what to do with the radioactive spent fuel rods. The U.S. has no permanent repository for about 77,000 tons (70,000 metric tons), stored mainly at the commercial nuclear power plants where they were used to produce electricity.

Idaho won federal court battles in 1990s to prevent the Energy Department's Idaho site from becoming a repository for spent fuel and other nuclear waste. Other states don't want it either.

"I think the Idaho National Laboratory is more optimistic about the future of nuclear energy than is warranted," said Beatrice Brailsford of the Snake River Alliance, an Idaho-based nuclear watchdog group.

Still, nuclear energy has been identified by U.S. officials as having a key role in reducing the nation's greenhouse gas emissions.