The future is clearer for a test reactor that develops fuel for the nation's fleet of nuclear-powered warships. 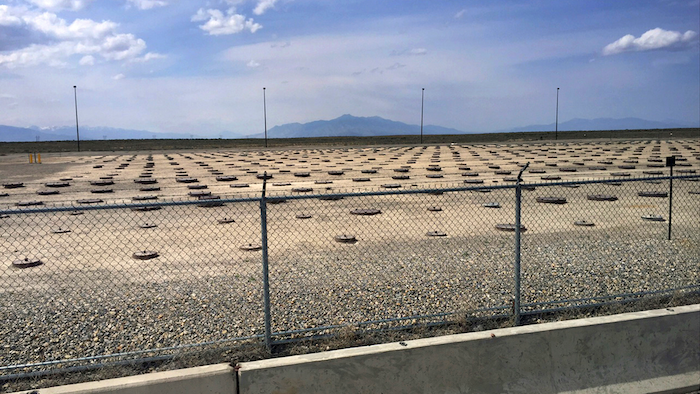 In this May 11, 2015 file photo, nuclear waste is stored in underground containers at the Idaho National Laboratory near Idaho Falls, Idaho.
AP Photo/Keith Ridler, File

BOISE, Idaho (AP) — The future is clearer for a test reactor in Idaho that develops fuel for the nation's fleet of nuclear-powered warships following an agreement signed Tuesday.

The agreement makes clear that spent fuel from the reactor can be kept in a cooling canal at the site past 2023, but must eventually go into dry storage and shipped out of state.

Idaho and the Energy Department disagreed that a 2023 deadline existed under a 1995 agreement between the two entities. The new agreement clears up that matter without litigation, Little and Wasden said.

“The agreement we just signed ensures the cutting-edge nuclear energy research at the ATR (Advanced Test Reactor) will continue, and will be done so safely," Little said in a statement.

The 1995 agreement requires nuclear waste to be out of Idaho by 2035. The deal announced Tuesday means waste from the Advanced Test Reactor will continue to be produced and put into the canal after that date.

But the deal limits how much time the spent fuel can be stored in the canal to six years, and requires it to be shipped out of state within one year of going into dry storage. The Energy Department must also tell Idaho officials how much spent fuel is in the canal.

“I’m pleased with this agreement because it provides certainty to our state regarding how the Department of Energy will manage this particular spent nuclear fuel while also creating an ongoing system of accountability,” Wasden said.

The Energy Department describes its Advanced Test Reactor as the world's most powerful research reactor. Besides helping develop fuel for the navy, it also assists universities and industry with nuclear research.

That deal announced Tuesday is similar to an agreement Idaho has with the U.S. Navy, which sends its spent nuclear fuel to the Energy Department's 890-square-mile (2,305-square-kilometer) site west of the city of Idaho Falls that includes the Idaho National Laboratory.

The state's primary concerns addressed in the 1995 agreement are preventing Idaho from becoming a nuclear waste dump, and also protecting a Lake Erie-sized aquifer that sits below the Idaho National Laboratory and supplies water to farms and cities in the region.

Tuesday's deal follows another agreement Little and Wasden signed with the Energy Department in November, also in relation to the 1995 agreement.

In that deal, Little and Wasden granted a conditional waiver to the Energy Department that could allow research quantities of spent nuclear fuel into the state after years of blocking such shipments.

The agreement means the Idaho National Laboratory could receive about 100 pounds (45 kilograms) of spent fuel for experiments as part of a U.S. strategy to expand nuclear power and reduce greenhouse gas emissions.