The city's mayor said that he will exhaust all options to stop Nexus Gas Transmission from burying 8 miles of pipeline in his middle-class community. 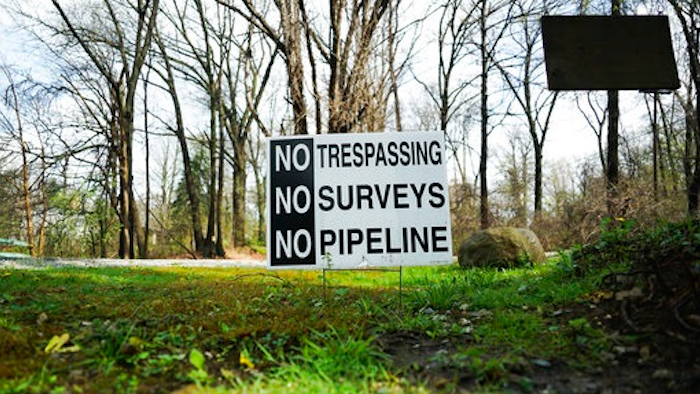 In this April 20, 2017 photo, a sign opposing a proposed pipeline sits in the front yard of a house in Green, Ohio. The town has hired a law firm to stop the pipeline from being built through the community.
AP Photo/Dake Kang

CLEVELAND (AP) — A mayor has upped the ante in the fight over a proposed high-pressure natural gas pipeline by hiring attorneys to file a lawsuit aimed at stopping the pipeline from being built or stopping the project altogether.

The Green City Council authorized spending $100,000 at a special meeting Tuesday to hire a Cleveland firm specializing in environmental law. This comes weeks after the council agreed to give $10,000 to a group preparing its own lawsuit over the Nexus pipeline.

Mayor Gerard Neugebauer told The Associated Press that he will exhaust all options to stop Nexus Gas Transmission from burying 8 miles of pipeline in the middle-class community of Green. He said the pipeline could cost the city millions of dollars annually in tax revenues from lost economic development opportunities, lead to the abandonment of city parks and harm environmentally fragile wetlands.

"I want justice to prevail," Neugebauer said. "I don't think what they're doing is just."

Nexus Gas Transmission is a partnership of Calgary, Alberta-based Enbridge and Detroit's DTE Energy. The company wants to build 255 miles of pipeline carrying as much as 1.5 billion cubic feet (42.5 million cubic meters) of gas per day from the Utica and Marcellus shale formations in Appalachia across northern Ohio and into Michigan. The company has told the Federal Energy Regulatory Commission some of the gas will be shipped to a trading hub and storage facility Enbridge owns in Ontario, Canada. Enbridge merged this year with Houston-based Spectra Energy, DTE's original partner.

Pipeline opponents argue that a Canadian company like Enbridge shouldn't be allowed to take property from U.S. landowners. An unknown number of property owners have refused to allow surveyors onto their property or negotiate easements for the pipeline and construction period.

Nexus spokesman Adam Parker said the pipeline will provide a new source of natural gas to businesses in Ohio and Michigan. He said Nexus has commitments for about 60 percent of the pipeline's capacity and is in discussions with other "interested parties" for the remaining 40 percent.

He said the company doesn't comment on potential litigation.

Opponents know their fight won't be easy. The Natural Gas Act of 1938 provides pipeline builders in the U.S. with wide latitude in acquiring property.

"I don't have animosity toward foreign companies," Neugebauer said. "But our government shouldn't be giving a foreign company more rights to property than the people who own the property."

The pipeline skirts a 150-acre (61-hectare) foreign free trade zone owned by the Akron-Canton Airport that Neugebauer fears will scare off companies from building there after a multimillion-dollar investment by the city, state and county on a street and utilities at the planned business park.

The pipeline route also cuts through or near several of Green's 10 city parks. It would be less than 100 feet (30 meters) from home plate at one of Green's baseball complexes. Neugebauer said he couldn't allow families to use parks inside the estimated 1,500-foot (457-meter) blast zone a pipeline explosion could create.

Green proposed other routes that would have moved the pipeline south into farmland. FERC concluded in an environmental impact statement the alternative routes held no advantages.

The environmental statement was a key regulatory hurdle for Nexus. The company now needs FERC commissioners to approve a "certificate of convenience and public necessity" to begin construction. The company said it hoped to start work in the first three months of 2017 and have the pipeline ready to ship gas before year's end. It missed the first deadline, and meeting the second appears unlikely.

FERC cannot approve a certificate until President Donald Trump nominates and the U.S. Senate confirms a new commissioner, an uncertainty given the slow pace of presidential appointments so far. FERC needs three commissioners to form a voting quorum but currently has only two.

Neugebauer hopes that the longer the project is delayed, the better the chances for the pipeline being moved or the project being canceled. Court decisions in the planned lawsuits could swing the Nexus timeline either way.

"I don't think we're dead in the water," Neugebauer said. "I think the end game is we stop them from putting the pipeline in Green."