The bill would boost renewables such as solar and wind power, as well as natural gas, hydropower and geothermal energy. It also would update building codes to increase efficiency and strengthen electric-grid safety standards, among dozens of provisions. 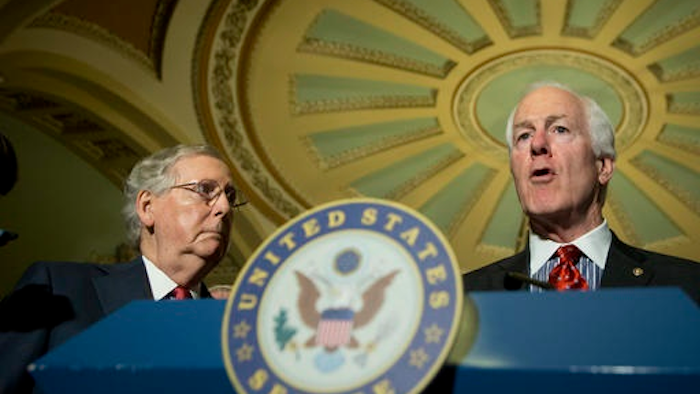 The latest energy bill has regained momentum in the Senate and is expected to pass as soon as Wednesday, April 20th.
AP Photo/Manuel Balce Ceneta

WASHINGTON (AP) — The Senate is poised to pass a wide-ranging energy bill that would promote a variety of energy sources and speed federal approval of projects to export liquefied natural gas to Europe and Asia.

Senators revived debate on the bill Tuesday after it was delayed for more than two months amid a partisan dispute over an emergency measure to help fix and replace lead-contaminated pipes in Flint, Michigan.

The bill would boost renewables such as solar and wind power, as well as natural gas, hydropower and geothermal energy. It also would update building codes to increase efficiency and strengthen electric-grid safety standards, among dozens of provisions.

Senate passage is expected as soon as Wednesday.

If approved, the measure must be reconciled with a House-passed bill that boosts oil and natural gas and speeds review of a proposed coal export terminal in Washington state. President Barack Obama has threatened to veto the House measure.

If approved by both chambers and signed by Obama, the bill would be first far-reaching energy law in nearly a decade.

Sen. Lisa Murkowski, an Alaska Republican and chairwoman of the Senate Energy and Natural Resources Committee, said the bill will help America produce more energy "and bring us one step closer to being an energy superpower. At the same time, it will help Americans save more money and save energy with all of the energy-policy provisions."

The bipartisan bill is widely popular, but was delayed in early February amid a partisan dispute over a plan by Michigan's two Democratic senators to send hundreds of millions of dollars in emergency aid to Flint to fix and replace the city's lead-contaminated pipes.

Sens. Debbie Stabenow and Gary Peters dropped the Flint provision last week after a months-long standoff with Sen. Mike Lee, R-Utah. Stabenow and Peters said they would seek another way to get the Flint aid package through the Senate.

Congress last approved broad energy measures in 2005 and 2007, during the George W. Bush administration. The two laws aimed to boost U.S. energy independence by cutting reliance on imported oil, boosting fuel economy standards for cars and imposing a mandate for ethanol in gasoline.

Since then, the U.S. energy landscape has changed dramatically, as improved drilling techniques, including hydraulic fracturing, have sparked a years-long boom that has pushed the United States toward become the world's top producer of oil and natural gas. Hydraulic fracturing, also known as fracking, involves injecting water mixed with sand and chemicals into underground rock formations, allowing oil and gas to flow.

The Senate bill includes a long-delayed energy efficiency measure that includes incentives to cut energy use in commercial buildings, manufacturing plants and homes. The measure, co-sponsored by Sens. Jeanne Shaheen, D-N.H., and Rob Portman, R-Ohio, has passed the Senate before but has not been approved in the House.