Authorities were investigating Sunday's incident, in which a plane carrying 137 people struck an object believed to be a drone as it was approaching Heathrow Airport. 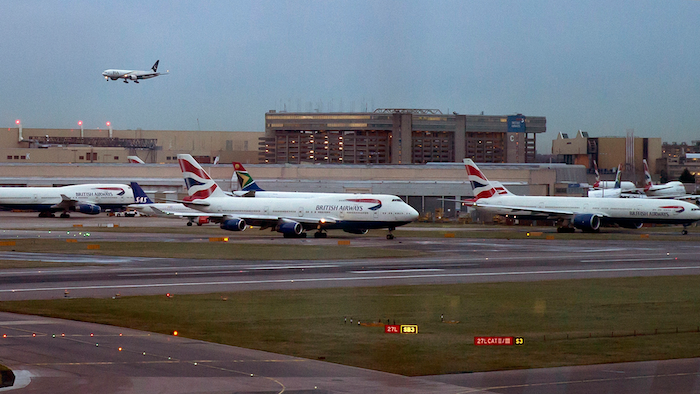 In this 2014 file photo, aircraft wait on the tarmac at Heathrow Airport in London. A collision between a British Airways passenger jet and a drone left the plane undamaged, but the aviation industry shaken. British police and air-accident authorities are investigating the incident.
AP Photo/Vadim Ghirda

LONDON (AP) — A collision between a British Airways passenger jet and a drone over London has left the plane undamaged, but the aviation industry deeply shaken.

British police and air accident authorities were investigating Sunday's incident, in which an Airbus A320 carrying 137 people struck an object believed to be a drone while it was approaching Heathrow Airport. The plane landed safely and was cleared to fly again after an inspection by engineers. But the incident has focused attention on the growing number of unregulated drones in the sky and the potential for disaster if they hit a plane — either accidentally or on purpose.

"It was only a matter of time before we had a drone strike, given the huge numbers being flown around by amateurs who don't understand the risks and the rules," said Steve Landells, a flight safety specialist at the British Airline Pilots Association.

HOW MANY DRONES ARE OUT THERE?

The authorities don't know exactly, since small drones bought for private use often don't have to be registered, but the market is growing fast as drones become cheaper and easier to operate. In Britain alone, electronics stores sold thousands during the 2015 Christmas season. Phil Finnegan, director of corporate analysis at aerospace research company Teal Group, estimates there are "several million" drones in the United States.

Tony Tyler, director-general of the International Air Transport Association, told an aviation conference in Denmark on Monday that drones "are here to stay. But we must not allow them to become a drag on the efficiency of the airways or a safety threat to commercial aviation," he said.

Tyler called for "a sensible approach to regulation and a pragmatic method of firm enforcement for those who disregard rules and regulations and put others in danger."

WHAT ARE THE RULES?

Many countries distinguish between commercial drone operators, which must be licensed, and those used recreationally.  In Britain, operators don't need a license to use a small drone weighing less than 20 kilograms (44 pounds) for recreational purposes.

Drones must not be flown above 400 feet (120 meters), must remain within sight of the operator and must and kept away from planes, helicopters, airports and airfields. Violators can receive six months in prison and a fine — though prosecutions have been rare — but endangering the safety of an aircraft carries a maximum life sentence.

HOW MANY INCIDENTS INVOLVING DRONES AND AIRCRAFT HAVE THERE BEEN?

While actual collisions are rare, Britain's Civil Aviation Authority says there were 40 near misses between drones and aircraft in 2015, compared to nine in 2014. Before that, such incidents were too uncommon to merit annual statistics. In the United States, the FAA recorded almost 600 incidents of drones getting too close to aircraft between August 22, 2015 and Jan 31, 2016.

WHAT COULD A DRONE DO TO A PLANE?

The biggest worries are a drone damaging the windshield or fuselage of a plane — with the additional danger that lithium batteries on the drone could ignite — or getting sucked into an engine. Aviation systems expert Philip Butterworth-Hayes says there has been relatively little research on the impact of such a collision.

"We don't know what happens when a drone gets inside an engine," he said. "The only thing you can do (to find out) is fly it into an engine, which is horrendously expensive. It's not a test you want to do all the time."

While the most obvious threat is from accidental collisions, experts have also warned that terrorists could seek to bring down a plane with an explosives-laden drone. Butterworth-Hayes said drones, lasers that can be shone in pilots' eyes and cyberattacks are among evolving threats to aviation.

"There's a whole new series of risks out there which we're just at the start of assessing and we don't know how big they are," he said.

WHAT CAN BE DONE TO CUT THE RISK?

The British government is considering introducing a drone-registration scheme so the aerial vehicles can be traced back to their owners. In the U.S, the FAA introduced a registration plan in December, with owners facing a fine if they don't comply. More than 400,000 people had registered by the end of March.

While new rules and better education are part of the solution, technology will also be a key factor. Drones can be fitted with "geo-fencing" software that prevents them from entering restricted areas. But geo-fencing technology is not a legal requirement for many drones, and criminals or those bent on terror could potentially disable the software.

Finnegan says developing new ways to stop rogue drones by disabling or destroying them is a high priority for defense and technology companies. "There's a whole new drive among aerospace and defense company to develop counter-drone measures — ways you can protect against either someone who doesn't know what they are doing or someone who does know what they are doing and is trying to do something bad," he said.