FCA Attempts to Keep India’s Lookalike Jeep Out of U.S.

Fiat Chrysler has filed a trade complaint trying to block the import of the Mahindra Roxor, calling it “nearly-identical” to the Jeep.

Many global automakers are struggling this year as overall sales volume is declining, thanks in large part to a mass consumer exodus from passenger cars. Fiat Chrysler experienced another pronounced hit this July, when longtime, visionary CEO Sergio Marchionne passed away suddenly at the age of 66.

And if that weren’t enough to navigate, one of the brightest points in Fiat Chrysler’s portfolio – the booming sales of its Jeep models – is facing new competitive threats.

Last month, the Jeep model lineup was up 15 percent, supported in part by the re-designed Wrangler, which is pacing to have its best year on record. But unfortunately for Fiat Chrysler, Indian automaker Mahindra is hoping to cash in on the U.S. market popularity of the Jeep-style vehicles by importing its own.

Bloomberg is calling it a Jeep “knock off,” and says Fiat Chrysler has filed a trade complaint trying to block the import of the Mahindra Roxor, accusing the company of using a “nearly-identical” body design.

While Mahindra says it’s India’s largest SUV producer, the company has extended its supply chain into the land of American automotive legacy – Michigan. Last year, the company established its North American headquarters in Troy and has since committed $600 million to expanding the facility and tripling its workforce.

But Fiat Chrysler says their Jeeps are threatened because Mahindra is able to undercut them on price, mostly due to a product that’s mostly manufactured in low-cost India and then “knocked-down kits” are sent to the US. for final assembly.

But it looks like the case could get a little muddy, and for two reasons: one, Mahindra actually licensed the design for the original 1940s Willys Jeep at one point and, according to Auto Blog, “it’s unclear where that license currently stands.”

And the other issue is that the Roxor isn’t actually even street legal in the U.S. due to not having passed the safety and emissions standards. Besides that, it’s top speed is 45 miles per hour, which would most likely send it directly into niche applications and keep it from head-to-head mass market competition with the Jeep. 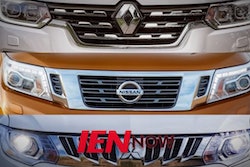 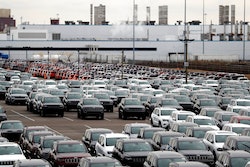