Rupert Stadler was charged with having known about the manipulation in Audi and Volkswagen cars and with continuing to sell the models despite that knowledge. 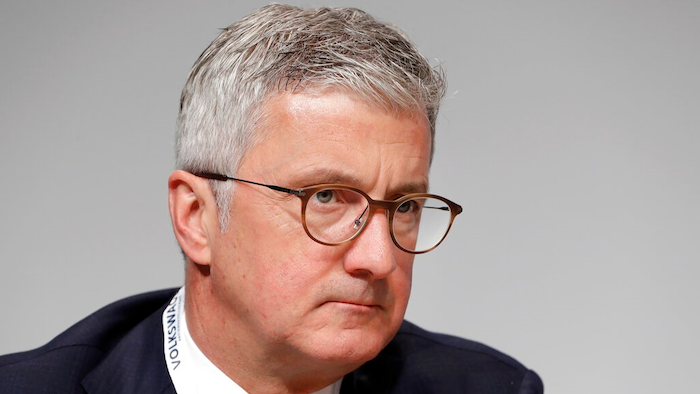 In this Thursday, May 3, 2018 file photo, Rupert Stadler, then CEO of Audi AG, attends the shareholders' meeting of the Volkswagen stock company in Berlin, Germany. German prosecutors announced Wednesday July 31, 2019, that they have charged Rupert Stadler and three other individuals with fraud in connection with sales of diesel cars with software that enabled cheating on emissions tests.
AP Photo/Michael Sohn, FILE

FRANKFURT, Germany (AP) — German prosecutors have charged the former head of Audi, Volkswagen's luxury division, with fraud in connection with the sale of cars with software that enabled cheating on emissions tests, adding another chapter to VW's diesel scandal that has seen its former CEO charged in the U.S. and two executives go to prison there.

Prosecutors in Munich said Wednesday in a news release that they had charged Rupert Stadler and three other individuals. The three unnamed individuals were charged with having developed engines used in Audi, Volkswagen and Porsche models that had software that made the emissions controls work better on the test stand than in real-life driving.

Stadler was charged with having known about the manipulation in Audi and Volkswagen cars and with continuing to sell the models despite that knowledge. Prosecutors said he found out about the impermissible software at the end of September 2015, at the latest, when the Volkswagen scandal broke, but continued permitting rigged cars to be sold.

Volkswagen was caught by U.S. authorities in September, 2015, and paid more than 30 billion euros ($33.5 billion) in fines and civil settlements. Former VW group CEO Martin Winterkorn is facing criminal charges in the U.S. but cannot be extradited, while two other executives have been sentenced to prison terms.

Stadler, 56, was held for four months in pre-trial detention last year before being released under conditions.

Audi said in a statement Wednesday that "the presumption of innocence continues to apply to all defendants until the allegations have been clarified."

The company said it was cooperating with the investigating authorities and added that "it is in the interests of the employees, the shareholders and the entire company to reach full legal clarification of the issues that led to the diesel crisis... This clarification is the prerequisite for the successful new start."