The trade show was all about military drones. 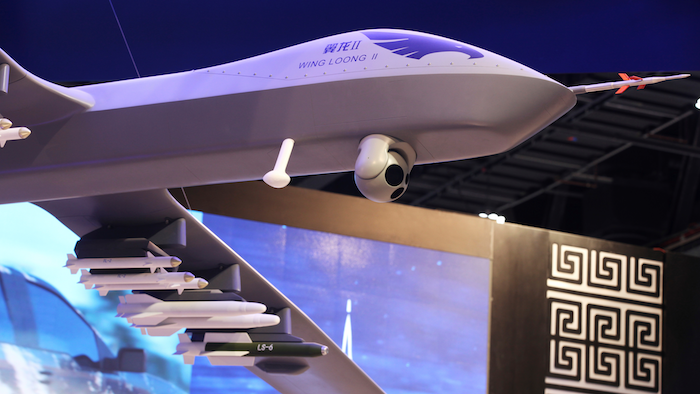 ABU DHABI, United Arab Emirates (AP) — Walking through a trade show all about military drones, Emirati officials made a point on Sunday to stop first at a stand run by Chinese officials with a mock armed drone hanging above them.

Defense analysts believe that drone, the Wing Loong II, is now being used by the Emirati military while the UAE remains barred from purchasing weaponized drones from the United States.

That purchase, as well as Abu Dhabi hosting the Unmanned Systems Exhibition & Conference this week in the Emirati capital, shows the power these weapons now hold across the Middle East (view photos in gallery).

The UAE, home to skyscraper-studded Dubai, already has embraced drones. Dubai's ruler, Sheikh Mohammed bin Rashid Al Maktoum, has given the $1 million Drones for Good Award in recent years. Meanwhile, civil defense officials fighting fires and lifeguards trying to save those at risk of drowning use drones in their work.

But the UAE remains highly interested in military drones.

Al-Dhafra Air Base near Abu Dhabi, which hosts some of the 5,000 American troops in the UAE, is also home to some of the U.S. military's unmanned aircraft that flew missions over Iraq and Syria targeting the Islamic State group.

Chief among those aircraft is the Predator, built by San Diego-based defense contractor General Atomics. The UAE previously purchased some $200 million worth of surveillance-only Predator drones from General Atomics.

The Obama administration opposed selling the UAE armed versions of the Predator over Missile Technology Control Regime, a 30-year-old agreement that aims to limit the spread of missile technology.

But that apparently didn't stop the UAE from purchasing weaponized drones. Satellite photographs taken of a mysterious Emirati air base in the country's deep south — a desert area known as the in the Empty Quarter — appear to show three Wing Loong IIs there, according to a January article by IHS Jane's Defense Weekly.

China has never acknowledged selling the drones to the UAE, though the state-run Xinhua News Agency has reported a major sale of the drones to a foreign buyer.

"We are trying to find the world market," he told The Associated Press after his colleagues greeted high-ranking Emirati officials.

General Atomics, which displayed a massive Predator surveillance drone nearby, declined to speak to the AP. However, U.S. lawmakers last year sent a letter to President Donald Trump asking him to allow armed Predator drone sales to both the UAE and Jordan.

Wildfire Fighters to Use Drones

Experts need to check the device for possible damage.
Nov 23rd, 2021
Follow Us
Most Recent