Nessie was seemingly lost for good until an underwater robot discovered the sunken monster.

Researchers in Scotland have finally gotten a glimpse of Nessie. That’s right – the Loch Ness Monster has been found … sort of.

Apparently, a crew for 1969 film titled “The Life of Sherlock Holmes” created a giant Loch Ness Monster prop for filming on location in the famous lake. The story goes that the director disliked the humps on the back of the 30-foot monster model and asked they be removed – despite protests from the designers who said it would affect the buoyancy of the prop… which it did, and the Loch Ness Monster sank, disappearing for years.

Nessie was seemingly lost for good until an underwater robot, which is being used to investigate what lies in the depths of Loch Ness, discovered the humpless, sunken monster. The torpedo-shaped Munin drone is equipped with sonar imaging and has already made several sweeps of the loch's bottom.

Malcolm Roughead, chief executive of VisitScotland, told the BBC that no matter how state-of-the-art the equipment is, and no matter what it may reveal, there will always be a sense of mystery and the unknown around what really lies beneath Loch Ness.

In related news, the editors of Gizmodo recently asked the creators of Animal Planet’s TV show, “Finding Bigfoot,” what the heck was taking so long. Their response? Bigfoots are very strategic, and rarely stay in one place for long. And to that, I say: Someone invent the Bigfoot detecting drone in my lifetime. Please. I don’t ask much of science. 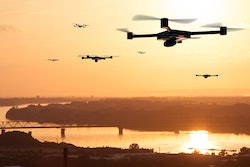