Experts are painting a dire picture. 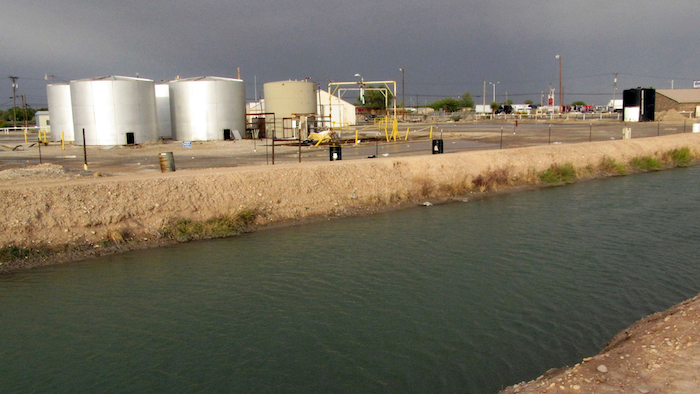 In this Oct. 28, 2009, file photo, empty water tanks sit at the edge of a brine well operation, shown at right of tanks, as a major irrigation canal flows by in Carlsbad, N.M. Experts are painting a dire picture for lawmakers about the impending collapse of a giant cavern that has formed under a highway interchange that serves as a gateway to southern New Mexico's oilfields and two national parks.
AP Photo/Susan Montoya Bryan, File

Experts are painting a dire picture about the impending collapse of a giant cavern under a highway interchange that serves as a gateway to two national parks and the heart of New Mexico's oil and gas country.

They told lawmakers Tuesday during a legislative meeting that new cracks are developing at the site on the edge of the city of Carlsbad, indicating that things are beginning to move underground.

"It is happening right now. It is happening in slow motion," said George Veni, executive director of the National Cave and Karst Research Institute and a member of a group that has been working on possible solutions.

Lawmakers are seeking more than $40 million in state funding to prevent a massive sinkhole, which could take with it the busy intersection, including a highway that leads to Carlsbad Caverns National Park and Guadalupe Mountains National Park, just across the state line in Texas. Nearby, there's also a church, trailer park, businesses and an irrigation canal that provides water for more than 30 square miles of agricultural lands.

They say the cracks, along with several holes that have developed on one side of the site, are alarming. It's where a now-defunct company had operated a well that produced millions of gallons of brine from salt layers deep underground for use in oil and gas operations.

An elaborate monitoring system was installed in 2009 in an effort to detect signs of a cave-in after the well caught state regulators' attention. Officials became concerned because the well shared some characteristics with two brine wells that collapsed north of Carlsbad during a four-month span in 2008.

In case of a sinkhole, officials have developed emergency response plans that include an automated phone alert system, siren warnings and door-to-door notifications.

In the race against time and gravity, Rep. Cathrynn Brown of Carlsbad said she fears the opportunity to fix the problem will pass if the funding isn't approved before lawmakers wrap up their work in mid-February.

"We definitely do have a lot at stake," the Republican said.

It will be up to a finance committee to consider a package of legislation before it reaches the House floor. Similar proposals are pending in the Senate.

Supporters argue that funding an effort to backfill the cavern would be less costly than dealing with an estimated $1 billion in economic impact, more than $100 million in groundwater cleanup and the possibility of injuries if the cavern were to collapse.

The city of Carlsbad and Eddy County are pitching in $4 million, but state officials are concerned about siphoning money from funds used for cleaning up other contamination in New Mexico.

Critics say the money could be found elsewhere given that New Mexico has more revenue to work with this year as lawmakers craft a state budget.

John Heaton, chairman of the group that has been working on the problem, said negotiations are underway with a contractor who could do the work necessary to fill the cavern — a process that could take two to three years. That timeline aligns with projections of when a collapse could occur, Heaton said.

Using sensors, experts say they have heard rocks flaking and dropping from the ceiling of the cavern, estimated to be about one football field wide by two football fields long and 150 feet (46 meters) deep.