Company unveils concept of the tank of the future. 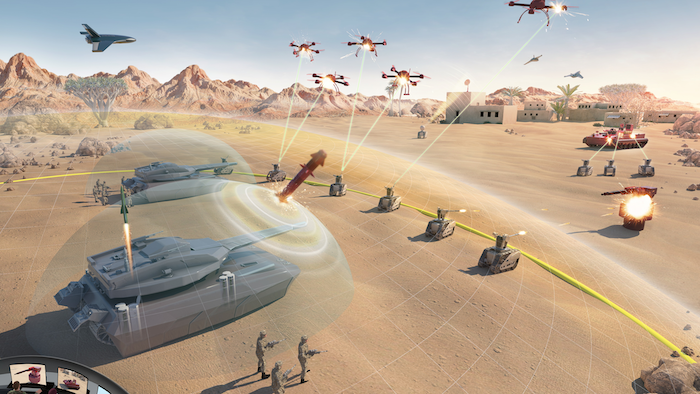 BAE Systems has unveiled a future concept of the tank of the future. It's an autonomous combat vehicle supported by fleets of smaller autonomous air and ground vehicles, working together in combat environments.

According to the company, soldiers will remain at the center of decision-making, but the aim is to remove soldiers from some dangers, increasingly using an unmanned network for hazardous tasks.

As well as sharing visual reconnaissance information, the network of autonomous air and ground vehicles would act as an outer perimeter for the main battle tank. To achieve this, the vehicles would engage threats and incoming attacks with on-board weapon stations – using conventional ballistics and countermeasures in the short-term before moving to laser directed energy weapons as they become available.

By incorporating "friend or foe" tracking, this perimeter could also protect nearby dismounted troops, detecting and neutralizing active threats and concealed IEDs.

With the need to process and quickly react to the growing amount of battlefield information, manned platforms will incorporate more autonomous systems, reducing the cognitive burden on human decision makers.

According to John Puddy, Technology Lead at BAE Systems Land (UK), “No-one can be entirely sure what the future will look like, but we do know that it’s a relatively short step from the technology available today to having a fleet of autonomous vehicles sharing situational awareness and – where appropriate – making certain decisions independently. Today’s active protection systems already make decisions which require ultra-fast reactions such as triggering explosive reactive armor. The pace of development means these reactions need to be faster than ever before.

Puddy says the U.S. Marine Corpswants to have an autonomous tank in the next five years. The challenge for BAE is less around the technology development and more around the debate on the appropriate use of autonomy on the battlefield.