Unmanned vehicles could one day lay mines and conduct surveillance. 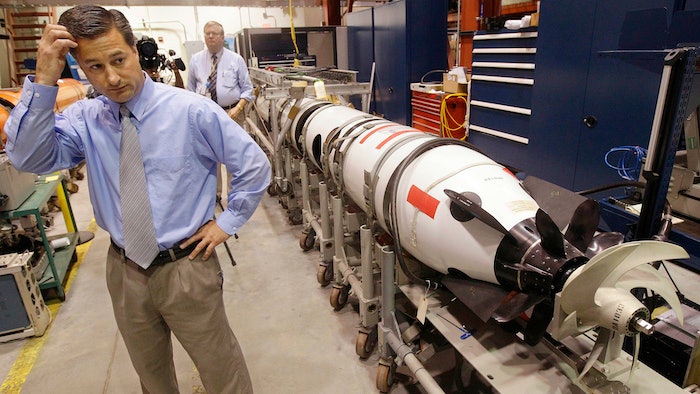 In this Tuesday, July 31, 2012 file photo, Christopher Del Mastro, head of anti submarine warfare mobil targets stands next to an unmanned underwater vehicle (UUV) in a lab at the Naval Undersea War Center in Middletown, RI. President Donald Trump and U.S. Navy leaders have said that the nation needs about 350 ships, roughly 75 more ships than the fleet has today. Adm. John Richardson, chief of naval operations, said they could get closer to the Navy's goal by counting unmanned vehicles that have capabilities similar to a manned ship.
AP Photo/Stephan Savoia, File

But there isn't money in the defense budget to buy a lot of new ships at once, and they take years to build.

Adm. John Richardson, the chief of naval operations, says they could get closer to the target faster by counting unmanned vessels with capabilities similar to a manned ship— a new twist on the definition of a ship.

Unmanned undersea vehicles currently used by the Navy aren't at the point now where they could replace manned platforms. While they can complete a task to support a mission, they can't complete an entire mission on their own, and none are weaponized, according to the Navy.

Richardson brought senior officers to Newport, Rhode Island, this month to talk about accelerating their development. The future Navy is going to be very different from today's fleet, he said.

"I can guarantee that it's not going to be building more of the same thing we have right now," he said. "Because that will not be the Navy that the nation needs to secure itself and promote its prosperity."

Richardson said he's trying to figure out how to increase naval power as quickly as he can because the Navy is being challenged at sea by very capable foreign naval forces. He said he's looking at vehicles that can do a range of things, including acting as sensors and carrying weapons, and can be networked in with the rest of the fleet.

At the Naval Undersea Warfare Center Division Newport, researchers are adapting commercial, off-the-shelf unmanned undersea vehicles for use by the military.

Dozens of unmanned undersea vehicles are being used by the Navy to sense oceanographic conditions and look for mines, with supervision by Navy personnel, said Jenny Roberts, the deputy for undersea influence at the Navy's Undersea Warfare Division.

Technological advancements in autonomy, endurance, command and control and other areas are needed before the Navy could assign anything more complex, like surveillance, she added.

The Navy could potentially get by with fewer ships if some of the larger, more capable unmanned vehicles could someday reliably do some of the easier missions ships do, but it's not a one-for-one replacement, said Bryan Clark, a senior fellow at the Center for Strategic and Budgetary Assessments.

An unmanned vehicle could lay mines and conduct surveillance but it couldn't board a pirate ship or help train a foreign Navy, added Clark, the lead author on a paper about the Navy's future force.

"It doesn't mean you buy an extra-large unmanned undersea vehicle and buy one less submarine," he said. "You have to figure out to what degree it replaces a submarine and do the math."

Extra-large vehicles are greater than 84 inches in diameter. The Navy doesn't currently have any of that size, Roberts said.

The Congressional Budget Office has estimated that the cost of building and operating 355 ships would average $102 billion annually through 2047, which is more than one-third higher than the amount appropriated for fiscal year 2016 for today's fleet. Richardson has said that he thinks it'll cost far less than that prediction.