At long last, a big honor for the Little People. 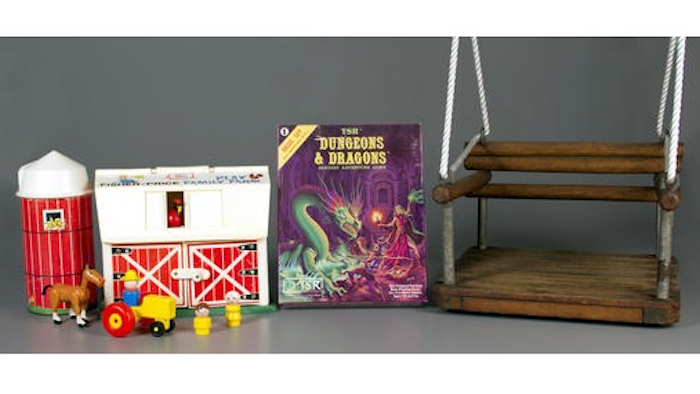 In this Sept. 22, 2016 photo provided by the The Strong museum in Rochester, N.Y., the three inductees into the hall's class of 2016, from left, Fisher-Price Little People, Dungeons & Dragons and the swing, are on display. After seven times as finalists for the National Toy Hall of Fame, the tiny tenants of Fisher-Price's house, barn and school bus were enshrined on Thursday, Nov. 10, 2016.
Bethany Mosher/The Strong museum via AP

ROCHESTER, N.Y. (AP) — At long last, a big honor for the Little People.

After seven times as finalists for the National Toy Hall of Fame, the tiny tenants of Fisher-Price's house, barn and school bus were enshrined on Thursday.

They were joined by the swing and Dungeons & Dragons in the hall's class of 2016.

"People have called us the Susan Lucci of the toy world," Fisher-Price spokeswoman Brenda Andolina said. The East Aurora-based toy maker sent a busload of employees to the ceremony, albeit a lower key one than when the much-nominated soap actress got her Emmy.

"One of their challenges has been, frankly, that they've been kind of little and they've been easier to overlook or postpone for our national selection advisory committee," said Chris Bensch, The Strong's vice president for collections. He said their relatively limited audience of 1- to 5-year-olds has been another hurdle.

Since being introduced in 1959, more than 2 billion Little People have been sold. The earliest tubular wooden versions evolved over the years to the plastic figures with arms, legs and dimensional faces of today.

"Moms have always loved Little People because it's really wholesome. ... It's all about sharing, caring, nurturing," Andolina said.

The company works to preserve that affection, she said, even changing the audio chip in the Little People SUV recently after a working mother complained that one of the toy mom's phrases — "Time for yoga and a smoothie" — missed the mark.

"Somebody called us out that that wasn't the best portrayal, it didn't resonate, so we reconsidered it and it was an easy change for us to make," Andolina said.

"It essentially is a vehicle for empowering them to make up stories," he said of the 1974 role-playing game created by Gary Gygax and Dave Arneson. It has a well-known celebrity fan in actor Vin Diesel, who has called it the "training ground for imagination" and said it helped him embrace the mythology of the "Riddick" movies.

Curator Nic Ricketts said the game's mechanics have lent themselves to computer applications, and that has had an impact on electronic games such as "World of Warcraft."

The swing was recognized for its longevity over centuries. Versions of the staple of modern playgrounds and backyards are depicted in ancient cave drawings in Europe, carved figures from Crete and ceramic vases from early Greece, the hall of fame said.

"Though the equipment has evolved with the centuries, the pleasure children and adults find in swinging has hardly changed at all," curator Patricia Hogan said.

Anyone can nominate a toy but to become a finalist, it must have lasted across generations, influenced the way toys are designed or played with and fostered learning or creativity through play. The finalists are chosen by historians and curators at The Strong and sent to a panel of expert judges who decide the winners.

After Thursday's induction, Fisher-Price employees who work on the Little People line snapped photos of the new display of the figures under glass and lights.

"I grew up with Little People. My mom played with it," marketing manager Sarah Leone said. "Now I have a 1-year-old daughter, and she's playing with it right now."