New technique has opened the door to give researchers a better view. 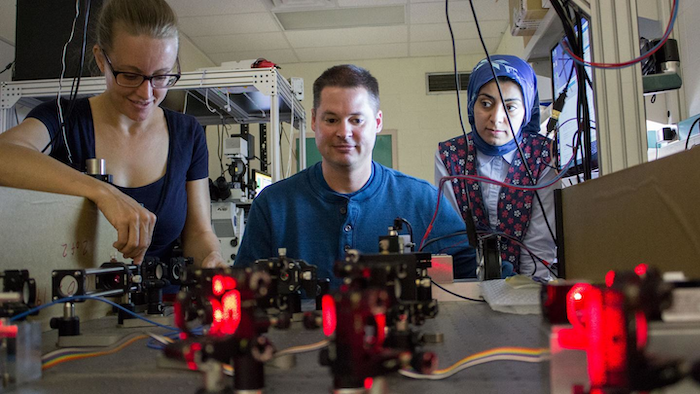 For scientists developing life-saving medicines, knowing how cells interact and communicate with one another is an important part of the puzzle. The problem is, being able to see those interactions through a microscope hasn't always been possible.

But now, thanks to University of New Mexico Associate Professor Keith Lidke, a new technique has opened the door to allow researchers a better view of cellular interactions.

The technique, published this year in Biomedical Optics Express, is called single objective light-sheet microscopy and improves on an existing method of fluorescence microscopy.

According to Lidke, who works in UNM's Department of Physics & Astronomy, traditional fluorescence microscopy techniques can only provide researchers a very limited view of the cells they're looking at and exposes the sample to an abundance of light that degrades the image quality and leads to cell damage through photo-toxicity.

"What light-sheet microscopy does is allow us create a sheet of light that is matched exactly to the focal plane that we're imaging," he explained. "We reduce light exposure and we reduce background noise in the system, so in living cells that allows us to see fluorescent proteins with enough signal to look at the dynamics of those proteins."

A new approach to this technique, developed by Lidke, his research group and collaborators at Sandia National Laboratories, overcomes these prominent issues and allows light-sheet microscopy to be performed using common microscopes found in most cell biology laboratories.

While Lidke's technique is still in its early stages, he has already received a lot of interest from researchers at UNM and across the country because of the unique view the equipment can provide. According to Lidke, cells function through signaling pathways which are a series of protein-protein interactions. But, exactly how those interactions work isn't clear due to a lack of technology available to see those events happen in living cells.

"What we're trying to do is to develop this light-sheet technology to see these interactions in living cells," said Lidke. "And, if we can understand how that's working then somebody may be able to target a therapy to a dysregulated signaling pathway."

Essentially, the technique has the ability to help answer questions about how cells communicate and work internally, making it possible for researchers to develop medicine or therapies that utilize these interactions.

The new technique is made possible through two different components; a specialized optics attachment that creates the light-sheet and a highly engineered microfluidics chip that holds the sample.

Lidke's group is responsible for creating the optics component which was developed as an attachment to most epi-fluorescent microscopes as a way to make the technique usable for a large audience.

Collaborators at Sandia National Labs worked with the group to develop the microfluidics chip which has an integrated mirror in it that allows them to create the light-sheet using a single objective lens. Together, these two pieces give researchers the opportunity to see cellular interaction on an entirely new level.

Right now, Lidke says he's working with the team at Sandia to develop an improved, next-generation chip that he expects to be made commercially available to researchers.