The hall of fame revealed 12 finalists for the class of 2016 on Tuesday. 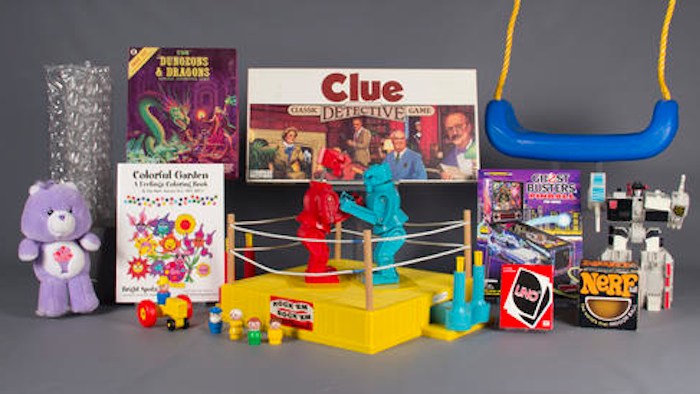 In this Aug. 10, 2016 photo provided by The Strong museum in Rochester, N.Y., are the 12 finalists for the class of 2016 for induction into the National Toy Hall of Fame: bubble wrap, Care Bears, Clue, coloring books, Dungeons & Dragons, Fisher-Price Little People, Nerf, pinball, Rock 'Em Sock 'Em Robots, swing, Transformers, and Uno. The winners will be chosen with input from a national selection committee and inducted on Nov. 10.
The Strong National Toy Hall of Fame via AP

ROCHESTER, N.Y. (AP) — The Fisher-Price Little People and Care Bears will square off against Rock 'Em Sock 'Em Robots and Transformers for a place in the National Toy Hall of Fame.

Whether any or all make it will be announced Nov. 10.

The hall revealed 12 finalists for the class of 2016 on Tuesday at The Strong museum. The list also includes Nerf foam balls, the board game Clue, the card game Uno, pinball, the swing, Dungeons & Dragons and coloring books.

Bubble wrap rounds out the list. If selected, it would join the cardboard box and stick among unconventional honorees.

To be recognized by the hall, toys must have lasted across generations, influenced the way toys are designed or played with and fostered learning or creativity through play.

Anyone can nominate a toy, and the hall receives thousands of suggestions email every year. Final selections are made on the advice of historians, educators and other experts.

About this year's finalists: