Telecom Networks Could Back Up GPS

What happens if GPS goes down? Researchers work to find a practical backup. 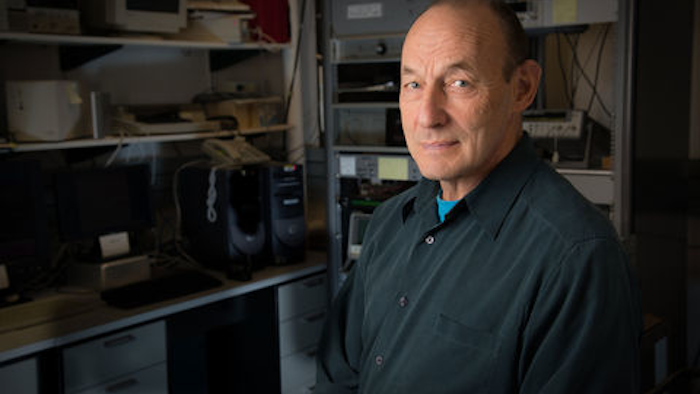 Mathematician Marc Weiss in the NIST Boulder laboratory that controls an experimental demonstration of time transfer over commercial telecommunications networks. In the experiment, equipment in this room locks onto NIST’s official version of international time, transfers time signals back and forth between NIST and U.S. Naval Observatory time services in Colorado Springs, and measures system time transfer accuracy.
Paul Trantow/Altitude Arts for NIST

In GPS systems, transmissions can be disrupted unintentionally by radio interference or the weather in space, for instance. Various types of intentional interference are possible also. Federal agencies have long recognized the need to back up GPS, a collection of several dozen satellites that has provided users with time and position information since the 1970s.

To explore the possibility of using commercial telecom networks as a backup for time services, an ongoing experiment connects the NIST time scales in Boulder, Colorado, with the USNO alternate time scale at Schriever Air Force Base in Colorado Springs by means of CenturyLink’s fiber-optic cables. The two federal time scales, 150 kilometers apart, are ensembles of clocks that generate versions of the international standard for time, Coordinated Universal Time (known as UTC), in real time.

In this experiment, time signals were sent at regular intervals in both directions between the two locations. Researchers measured the differences between the remote (transmitted) and local time.

The results, just presented at a conference, showed UTC could be transferred with a stability of under 100 nanoseconds (ns, or billionths of a second)—thus meeting the project’s original goal for this metric—as long as the connection remained unbroken. Stability refers to how well the remote and local clocks remain synchronized.

Because the signals were forwarded by various pieces of equipment along each path, they experienced significant unequal delays in the two different directions. This reduced overall performance, resulting in an accuracy that did not meet the stated goal of 1 microsecond (millionths of a second).* With the GPS available to calibrate (and thus correct for) the unequal delays,  time transfer could be accomplished maintaining that calibration within 100 ns if GPS were to “disappear,” the study suggests.

“The 100 ns stability level is good enough to meet a new telecommunications standard,” said lead author Marc Weiss, a mathematical physicist at NIST. “We’ll continue trying to meet the 1 microsecond accuracy level, which is needed by critical infrastructure such as the power industry.”

The conference paper notes that if the fiber-optic network or its power source went down and had to be re-established, then GPS or some other alternative time reference would be needed to recalibrate the fiber-optic circuit. The authors suggest the fiber network could serve as a partial backup to the GPS, and the GPS could be used for calibration to correct timing delays. Or, to provide a more reliable backup for the GPS, two independent telecom network paths could be used.

In the experiment, fiber-optic cables run from NIST and USNO to their respective nearby CenturyLink offices, where the signals are multiplexed into the network on a dedicated wavelength not shared with any other customers. The experiment began in April 2014 and will run through the end of 2016.

“It appears that there is at least one commercial transport mechanism that could serve to back up GPS for time transfer at the 100 ns level,” the paper concludes. “We have some certainty that similar results will apply if this technique were used as a service across the country.”

The need for precision timing backup has grown along with the importance of GPS. According to a 2013 study by the Government Accountability Office, “GPS is essential to U.S. national security and is a key component in economic growth, safety, and national critical infrastructure sectors.” An inability to mitigate GPS disruptions could result in billions of dollars in economic losses, the study found.

The NIST research is being carried out under a Cooperative Research and Development Agreement among NIST, CenturyLink, and Microsemi, which, in addition to collaborating on the research, is providing equipment that transmits and receives timing signals. The project has been extended to January 2017, with the possibility of testing the technique in a time transfer experiment spanning the nation.