The agency hasn't received a signal from the lander for a year. 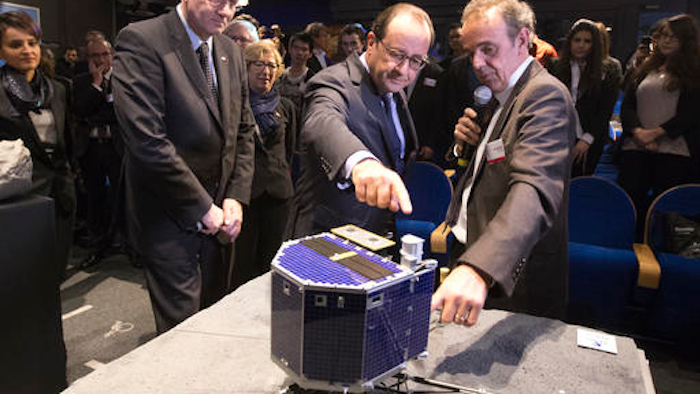 In this Wednesday, Nov. 12, 2014 file photo, French President Francois Hollande, center, with French astrophysicist Francis Rocard look at a model of Rosetta lander Philae, as they visit the Cite des Sciences at La Villette in Paris during a broadcast of the Rosetta mission as it orbits around comet 67/P Churyumov-Gersimenko.
AP Photo/Jacques Brinon, Pool, file

BERLIN (AP) — The European Space Agency says it is switching off its radio link to the probe that landed on a comet, after receiving no signal from the lander for a year.

The agency says the decision to shut down a communications instrument on the Rosetta spacecraft Wednesday was taken to conserve energy.

Rosetta had used the instrument to communicate with its lander, Philae, which touched down on comet 67P/Churyumov-Gerasimenko in November 2014.

During the next two months, Rosetta will use its remaining power to conduct scientific measurements before it crash-lands on the comet Sept. 30.

Data collected by Rosetta and Philae have improved scientists' understanding of comets and the role they played in the early universe.