Gearing up for the Olympics has apparently become a task that, in addition to hard work, dedication and an unbreakable competitive spirit, also involves computation design software, 3D printing, heat mapping, energy disbursement analysis and material stiffness testing … for shoes.

Nike recently unveiled their Zoom Superfly line of shoes for Olympic sprinters. And before it even gets to Rio, it’s already been the source of more than four years of development at Nike’s Sports Research Lab, which used computational dynamics software to identify vital performance advantages like pixel-level analysis of the optimal placement of stitches … in shoes.

NIke worked with sprinters Allyson Felix and Shelly-Ann Fraser-Pryce in adjusting spike lengths and creating a sole or plate with the precise amount of rigidity. This was combined with heat maps created of Pryce as she ran the 100-meter dash. This data was fed into an algorithm, which enabled the creation a spike plate that was lighter and features the optimal level of rigidity in complimenting the biomechanics of a runner’s stride.

Selective Laser Sintering was then used to produce 3D printed prototypes which runners could try out and provide feedback.

Extensive testing was also done to the shoe’s Flyknit upper, which for the first time in a sprint spike, extends to three-quarter height. This will supposedly support a larger portion of the foot and facilitate a more fluid motion. 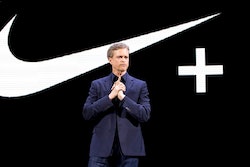 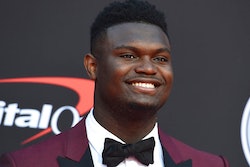 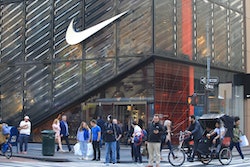