Shear thickening could lead to body armor that better defends against knife wounds, and protects soldiers against projectiles and blast debris. 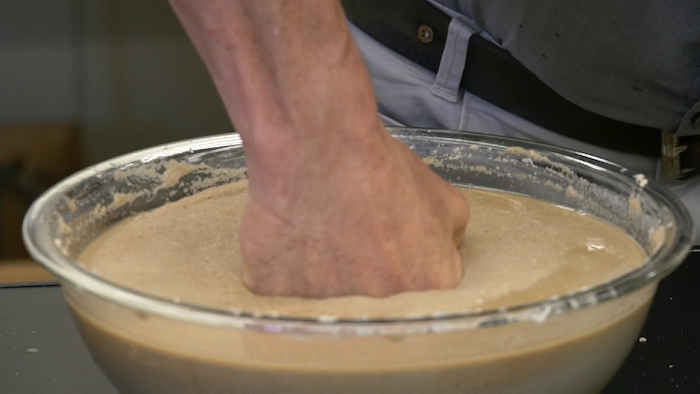 NIST and Georgetown scientists have developed a new picture to describe oobleck and similar mixtures of fine particles suspended in liquids.
NIST

By revealing missing details behind the odd behavior of a science fair favorite—a soupy mixture known as “oobleck” that switches back and forth between liquid and solid— scientists from the National Institute of Standards and Technology (NIST) and Georgetown University could help to end a long-running scientific debate and improve processes ranging from pouring concrete to making better body armor (see video below).

Oobleck’s name is borrowed from a Dr. Seuss classic (Bartholomew and the Oobleck). Squeeze or pound it and, in an instant, the slurry of cornstarch and water becomes solid, only to revert to ooze once the stress is relieved.

The NIST and Georgetown scientists have developed a new picture to describe oobleck and similar mixtures of fine particles suspended in liquids.

Based on flow measurements of tiny silica beads dispersed in solution, the model invokes two competing theories to explain the phenomenon of “shear-thickening” fluids, which stiffen in response to stress.

Known more formally as non-Newtonian substances, shear-thickening fluids are more than just curiosities. “They dictate how much stuff you can move and at what speed,” said Daniel Blair, a Georgetown University physics professor and co-author of an article published in Physical Review Letters. “In the chemical processing industry, you’re looking for the most efficient way to move something through a pipe, without breaking a pump. To do that, you want to know as much as you can about shear thickening so you can control it.”

Opposing theories—one drawing mostly on experimental evidence, the other on results of modeling studies—have been proposed to explain shear thickening in suspensions of microscopic particles, also called colloids. Rather than competing, it turns out that the two are complementary, according to the new research.

At low concentrations of silica beads, Royer, Blair and NIST materials scientist Steven Hudson found that measurements of stress were consistent with the hydrodynamic model. The model posits that impact forces particles to pack into assemblies called hydroclusters.

As stress increases, the hydroclusters contract and the fluid thickens, or becomes more viscous. Liquid is squeezed out of the clusters, creating an ever-thinner lubricating layer separating the particles and making the scattered clusters more rigid.

But as in earlier experiments, Royer says, the amount of shear thickening observed exceeded the levels that models indicated could be achieved with hydroclusters.

A competing model invokes frictional contacts—essentially, particle collisions caused by stress—as the primary driver of thickening. But, the friction model requires materials to expand—or dilate—once stress surpasses a threshold and particles lock into place so that they are unable to squeeze by each other, as in the hydrodynamic model.

Therein lies the rub. Experiments to date have not yielded evidence of stress-caused expansion, leading some scientists to rule out friction as playing a significant role in shear thickening.

Royer and colleagues tackled these quandaries by measuring how colloids with different concentrations of bacterium-sized spheres responded to stresses ranging from slight to large. These measurements, done on a state-of-the-art rheometer, or flow-measurement device, at Georgetown’s Institute for Soft Matter Synthesis and Metrology, unmasked “a previously hidden transition from hydrodynamics-dominated to friction-dominated interactions as the shear thickening becomes more pronounced,” Royer says.

They found a transition from contraction to expansion, which occurs without fanfare—or no observable change in shear-thickening behavior itself.

“This transition demonstrates that shear thickening is driven primarily by frictional contacts, with hydrodynamic forces playing a supporting role at lower concentrations of particles, when mixtures are less dense,” Royer explained. “These results now motivate new microscopic approaches to control shear thickening in industrial applications, by either minimizing thickening when steady flow is needed or controlling thickening for use as in flexible body armor applications.”

Protective clothing applications under development aim to exploit shear thickening to, for example, strengthen defense against knife wounds in the case of body armor and to further enhance protection against penetration by projectiles and blast debris.

Next, digital telepathy and immortality.
Feb 23rd, 2021
Follow Us
Most Recent