Doppio is being positioned as a reconfigurable smartwatch with two touch-sensitive display faces, one of which detaches from the wrist-bound screen and can be stuck above or to the side. 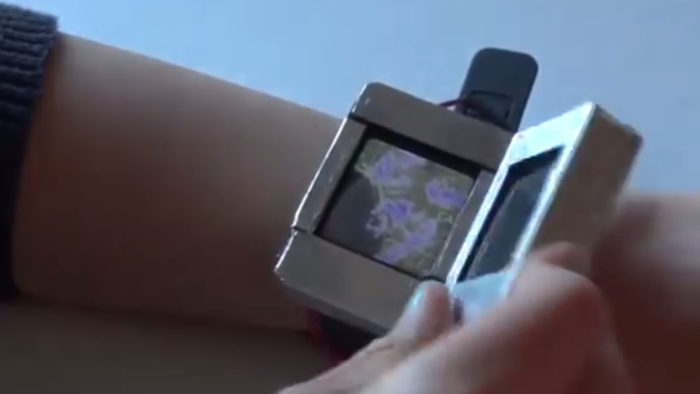 A Dartmouth researcher and his collaborators have unveiled a prototype of a smartwatch with dual touchscreens called Doppio. The researchers presented their findings at the CHI Conference on Human Factors in Computing Systems.

A video presentation of the screen is available here.

Doppio is being positioned as a reconfigurable smartwatch with two touch-sensitive display faces, one of which detaches from the wrist-bound screen and can be stuck above or to the side. "The orientation of the top relative to the base and how the top is attached to the base create a very large interaction space," says Xing-Dong Yang, an assistant professor of computer science at Dartmouth.

In their presentation, the researchers discussed possible configurations, transitions and manipulations in this space. Using a passive prototype, they conducted an exploratory study to probe how people might use this style of smartwatch interaction. And with an instrumented prototype, they conducted a controlled experiment to evaluate the transition times between configurations and subjective preferences.

They used the combined results of these two studies to generate a set of characteristics and design considerations for applying this interaction space to smartwatch applications. "Our proof-of-concept hardware prototype demonstrates how Doppio interactions can be used for notifications, private viewing, task switching, temporary information access, application launching, application modes, input and sharing the top," Yang says.