For the first time, spacecraft have flown through the heart of a magnetic process that controls Earth's space weather and geomagnetic storms. 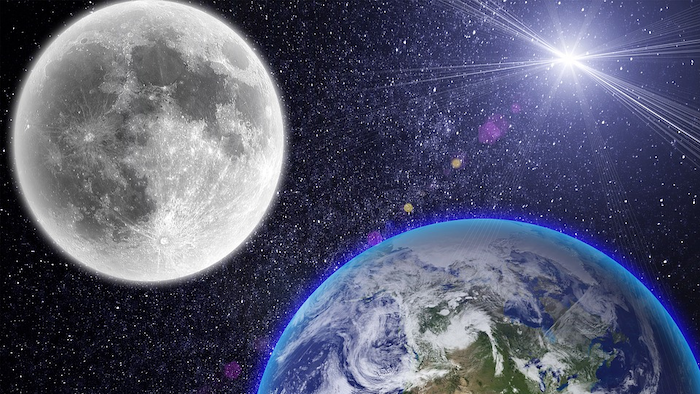 For the first time, spacecraft have flown through the heart of a magnetic process that controls Earth's space weather and geomagnetic storms.

The Earth is surrounded by a magnetic bubble, called the magnetosphere, which protects us from harmful radiation from space. The magnetosphere is defined by magnetic field lines, stretching out into space from the Earth. When these lines come up against field lines in different orientations - for example from the Sun - a process called magnetic reconnection occurs.

Magnetic reconnection is when the field lines clash and rearrange themselves in an explosive reaction. The process throws out hot jets of particles, allowing them to cross boundaries normally created by the field lines. In the Earth system, this process plays the key role in causing geomagnetic storms that can disrupt communications systems on the surface and satellites in space. It also leads to the creation of the auroras in the northern and southern hemispheres.

At the heart of magnetic reconnection is an extremely fast reaction that shoots out protons and electrons. The movement of protons had been observed before, but now spacecraft have been able to capture direct measurements of the movements of the electrons for the first time.

The measurements showed that the electrons shot away in straight lines from the original event at hundreds of miles per second across the magnetic boundaries that would normally deflect them. Once across the boundary, the particles curved back around in response to the new magnetic fields they encountered, making a U-turn.

The measurements, published today in the journal Science, come from NASA's Magnetospheric Multiscale (MMS) Mission, launched in March 2015. On October 16, 2015, the spacecraft traveled straight through a magnetic reconnection event at the boundary where Earth's field lines bump up against the Sun's field lines.

Dr Jonathan Eastwood from Imperial's Department of Physics, who was part of the team searching the data for reconnection events and analyzing the results, said: "There have been theories about the movement of electrons in magnetic reconnection for decades, but this is the first real proof of what they do. We have known what should be there - but knowing and actually measuring are two very different things."

The scientists' observations coincide with a computer simulation known as the crescent model, named for the characteristic crescent shapes that the graphs show to represent how far across the magnetic boundary the electrons can be expected to travel before turning around again.

"This is the first time we have flown through the heart of a reconnection event. While the data support the crescent theory, some measurements do differ from what we might expect, throwing up new questions about the dynamics," said Dr Eastwood. "Understanding the fundamental physics of this process will have a real impact on our understanding of disruptive space weather events."

MMS is made up of four satellites flown in a precise formation using GPS that keeps them only around 10 kilometers apart. This allows them to map the evolution of the event as it happens, and to track the small-scale movements of electrons. It is also able to track the electrons much faster than previous satellites.

Dr Tom Moore, the mission scientist for MMS at NASA said: "Satellite measurements of electrons have been too slow by a factor of 100 to sample the magnetic reconnection region. The precision and speed of MMS, however, opened up a new window on the universe, a new 'microscope' to see reconnection."

MMS has made more than 4,000 trips through the magnetic boundaries around Earth, each time gathering information about the way the magnetic fields and particles move. Not every reconnection event is explosive - some are steady and sometimes when field lines meet it doesn't happen at all. The variation has long been a mystery, which this new data could help solve.

The first phase of the mission flew through magnetic boundaries on the day side of Earth, facing the Sun. Magnetic reconnection also occurs at the night side, in a region called the magnetotail, where it affects the aurora. Reconnection events here are expected to be 'more explosive', according to Dr Eastwood, as they brighten the aurora and create magnetic storms.