In addition to volcanic ash melting within an operating aircraft engine and causing a failure, volcanic activity has have had a significant and disruptive impact on supply chains. 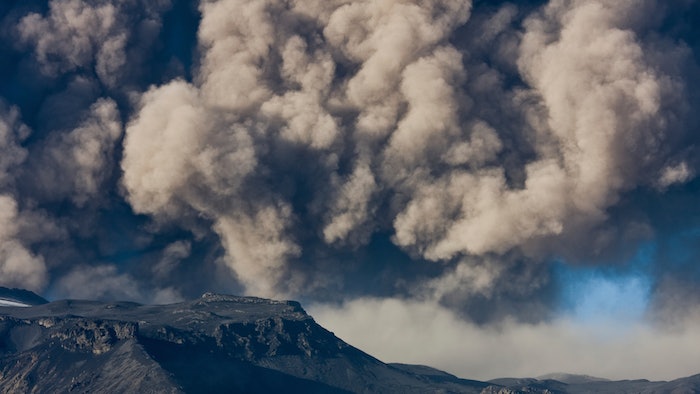 Eruptions like this one from Eyjafjallajökull in Iceland in 2010 can disrupt air travel and industrial supply chains.

A volcano erupting and spewing ash into the sky can cover nearby areas under a thick coating of ash and can also have consequences for aviation safety. Airline traffic changes due to a recent volcanic eruption can rack up unanticipated expenses to flight cancellations, lengthy diversions and additional fuel costs from rerouting.

Airlines are prudently cautious, because volcanic ash is especially dangerous to airplanes, as ash can melt within an operating aircraft engine, resulting in possible engine failure. In the aftermath of a volcanic eruption, airlines typically consult with local weather agencies to determine flight safety, and those decisions today are largely based on manual estimates with information obtained from a worldwide network of Volcanic Ash Advisory Centers. These centers are finding timely and more accurate satellite data beneficial.

Researchers at NASA's Goddard Space Flight Center in Greenbelt, Maryland, are using already available satellite measurements of sulfur dioxide (SO2), a main components of volcanic emissions, along with the more recent ability to map the location and vertical profiles of volcanic aerosols. Researchers are doing this in a number of ways.

A volcanic cloud contains two kinds of aerosols: sulfuric acid droplets converted from SO2 and silicate volcanic ash. Satellites can detect volcanic ash by observing the scattering of ultraviolet light from the sun. For aviation, volcanic ash is potentially the most deadly because of the danger to aircraft engines. While measurements of aerosol absorption in ultraviolet do not differentiate between the smoke, dust and ash aerosols, only volcanic clouds contain significant abundances of SO2, so satellite measurements of SO2 are especially valuable for unambiguous identification of volcanic clouds.

Knowing both the physical location and the altitude distribution of aerosols in the volcanic cloud allow more accurate forecasts in the days, weeks and months after an eruption. "The capability of mapping the full extent of a three-dimensional structure of a moving volcanic cloud has never been done before," said Nickolay A. Krotkov, physical research scientist with the Atmospheric Chemistry and Dynamics Laboratory at NASA Goddard.

"With the OMPS instrument, the volcanic cloud is mapped as Suomi NPP flies directly overhead and then as it looks back, it observes three vertical slices of the cloud," said Eric Hughes, a research assistant at the University of Maryland, who is working with Krotkov at NASA Goddard.

Knowing the timing and duration of an eruption, the altitude and amount of the volcanic emissions are critical for an accurate volcanic forecast model being developed at the Goddard Modeling and Assimilation Office. The height of the plume is particularly critical for forecasting the direction of the plume. Even several kilometers of height can make a significant difference in predicting plume movement. More accurate volcanic cloud forecasts could reduce airline cancellations and rerouting costs.

While aviation is a short-term immediate application for volcanic cloud modeling, there are also long-term climate applications. "Sulfate aerosols formed after large volcanic eruptions affect the radiation balance and can linger in the stratosphere for a couple of years," said Krotkov.

There have been large volcanic eruptions that have contributed to short-term cooling of Earth from the SO2 that reaches the stratosphere, which is what happened following the Philippines Mount Pinatubo eruption in June 1991. During volcanic eruptions, SO2 converts to sulfuric acid aerosols. Now researchers are studying the impacts of deliberately injecting SO2 into the stratosphere to contract the effects of global warming, known as climate intervention.

"Nature gives us these volcanic perturbations and then we can see the impact on climate," Krotkov said. "These are the short- and long-term consequences of volcanic eruptions that have both aviation and climate applications."