His space capsule violently ripped from his damaged rocket shortly after liftoff, then plunged steeply back to Earth with punishing force. 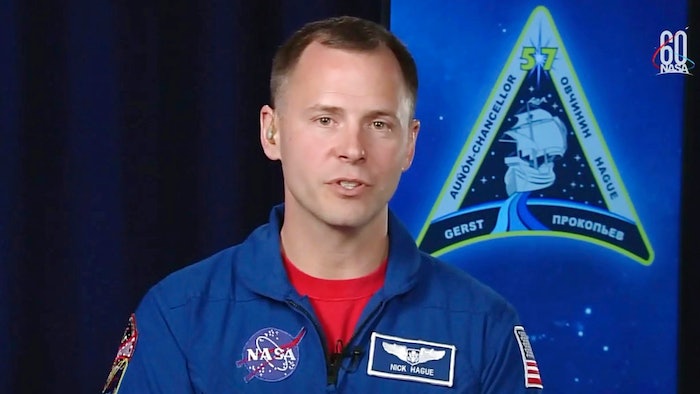 n this frame from video from NASA TV, NASA astronaut Nick Hague, who survived the Oct. 11, 2018, failed launch and emergency landing, speaks Tuesday, Oct. 16, 2018, from the NASA Johnson Space Center in Houston. Hague and Russian Alexei Ovchinin were two minutes into their flight last Thursday from Kazakhstan to the International Space Station when the Soyuz rocket failed.
NASA TV via AP

Air Force Col. Nick Hague on Tuesday described the closest call of his career: His space capsule violently ripped from his damaged rocket shortly after liftoff, then with lights flashing and alarms sounding, plunged steeply back to Earth with punishing force.

Hague said he and his commander, Russian Alexei Ovchinin, were flung from side to side and shoved back hard into their seats, as the drama unfolded 50 kilometers (31 miles) above Kazakhstan last Thursday. One of the four strap-on boosters failed to separate properly two minutes into the flight to the International Space Station and apparently struck the core rocket stage, resulting instantaneously in a rare launch abort.

It was the first aborted launch for the Russians in 35 years and only the third in history. Like each one before, the rocket's safety system kept the crew alive.

Hague — the first American to experience a launch abort like this — communicated in Russian throughout the more than half-hour ordeal.

"All of my instincts and reflexes inside the capsule are to speak Russian," said Hague, who had two years of training in Russia.

"We knew that if we wanted to be successful, we needed to stay calm and we needed to execute the procedures in front of us as smoothly and efficiently as we could," Hague told The Associated Press from Houston.

The astronauts experienced a few moments of weightlessness after their Soyuz capsule catapulted away from the rocket. Hague, making his first launch, saw the curvature of Earth and the blackness of space.

Between the abort and touchdown, Hague looked out the window to make sure the capsule's systems were operating properly and to check their landing. They braced for the extreme force — seven times the force of gravity — of the unusually steep descent and the shock of the parachutes popping open.

They landed on the smooth, flat terrain of Kazakhstan.

"You can imagine the scene," Hague said. "We're kind of hanging upside-down from our straps ... and we looked at each other, big grins. He holds out a hand. I shake his hand. And then we start cracking a few jokes between us about how short our flight was."

Neither man was injured.

Hague, 43, said he's dealt with in-flight emergencies during his Air Force career, but nothing like this.

"Any time you're launching yourself into space and your booster has a problem when you're going 1,800 meters per second, things are pretty dynamic and they happen very fast," he said.

He's grateful the emergency system worked despite the fact it hadn't been called into action for decades.

His emotions bubbled up once he was reunited with his wife, their two young sons and his parents, back at the launch site. His youngest wanted to know when he was going back to space.

Hague said he has no clue as to when he'll get a second shot, but is ready as soon as he gets the go-ahead. A Russian accident investigation is continuing, with all crew launches to the space station on hold. The space station, meanwhile, is managing for now with a crew of three.

"What can you do? Sometimes you don't get a vote," Hague said. "You just try to celebrate the little gifts that you get, like walking the boys to school this morning."