Fiat Chrysler CEO: Self-Driving Cars Could be on Roads in 5 Years

FCA and Google announced a partnership earlier this week. The companies will work together to add self-driving technology to 100 Chrysler Pacifica minivans for testing purposes. 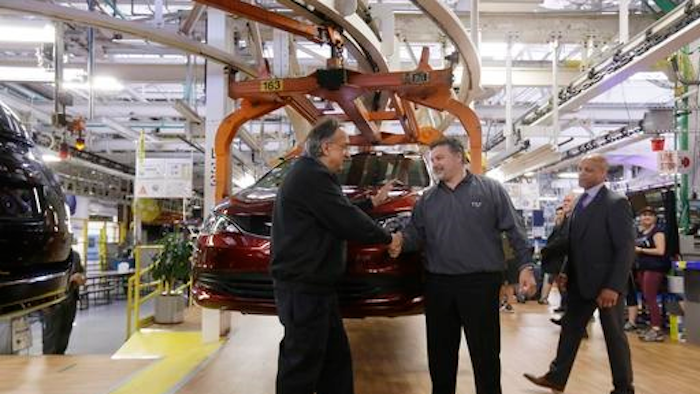 Fiat Chrysler Automobiles Chairman and CEO Sergio Marchionne, left, shakes hands with Dino Chiodo, president of Unifor Local 444 in front of a 2017 Pacifica minivan on the Windsor Assembly Plant line, Friday, May 6, 2016, in Windsor, Ontario. Fiat Chrysler and Google announced Tuesday, May 3, that they will work together to more than double the size of Google's self-driving vehicle fleet by adding 100 Chrysler Pacifica minivans.
AP Photo/Carlos Osorio

WINDSOR, Ontario (AP) — Fiat Chrysler CEO Sergio Marchionne says working with Google convinced him that self-driving technology is closer than he thought and could be on the road in five years.

"I don't find it that unsettling," Marchionne said Friday. "I see this as having tremendous use in real life."

FCA and Google announced a partnership earlier this week. The companies will work together to add self-driving technology to 100 Chrysler Pacifica minivans for testing purposes.

This is the first time Google has worked directly with an auto company to install self-driving sensors and computers. Marchionne discussed the partnership at a ceremony to mark launch of Pacifica production at FCA's plant in Windsor. The Pacifica is replacing the Chrysler Town and Country.

Some automakers have been reluctant to team up with tech companies because they want to own the technology in their cars. But Marchionne says it's too early to say who will lead the transition to a self-driving future, so it's smart for FCA to work with others and learn what it can.

"Making unequivocal bets and precluding development with others is a very dangerous path, at least in our view," he said.

Marchionne said FCA and Google will have to work out specifics — like who owns the data in the cars — down the road.

"We need to get to the stage where the car is viable before we can discuss the spoils," he said.

Marchionne said it was initially unsettling to get into Google's self-driving test cars in California, but as he rode in them he felt "absolutely safe."

"You could almost feel the reasoning process that the car was going through," he said. "It's like watching a robot execute, and it executes well."

The experience left him feeling that self-driving cars have great potential, he said, as long as regulators establish rules for their use.

The partnership is limited. Google isn't licensing its autonomous software to Fiat Chrysler, for example, and both companies are free to work with other partners. Marchionne says it doesn't bother him that Google will work with other automakers. FCA is in a weaker bargaining position than much wealthier tech companies, he said, but it knows how to make cars, which Google has said it doesn't want to do.

Google will use the hybrid version of the Pacifica, which is being built for the partnership now but will go on sale to the public at the end of this year.

The Windsor plant, which has made more than 10 million minivans since Chrysler introduced them in 1983, got $744 million in upgrades and 1,200 new workers to build the minivans.