The business plan is Sergio Marchionne's grand finale as he leads up to retirement. 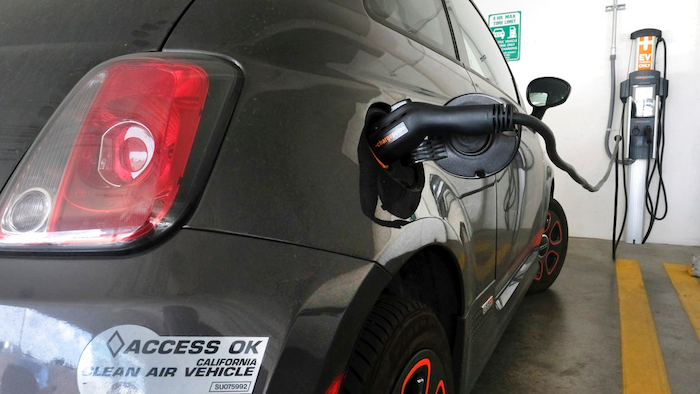 In this April 25, 2016, file photo, an electric Fiat plugged into a charging station in a parking lot in Los Angeles. California utilities will invest nearly $768 million to expand a network of charging stations and other infrastructure for electric vehicles as the state moves toward a goal of 5 million zero-emission cars on the roads by 2030. The California Public Utilities Commission voted 5-0 Thursday, May 31, 2018, to fund programs statewide, with an emphasis on building facilities in disadvantaged communities.
AP Photo/Richard Vogel, File

BALOCCO, Italy (AP) — In his last big presentation as CEO of Fiat Chrysler before retiring next year, Sergio Marchionne said Friday that the Italian-American carmaker will this month hit its long-held goal of having no debt as it turns its focus to making more electrified cars.

As he announced the company's five-year plan, Marchionne broke with personal style and donned a tie instead of his signature sweater, as he said he would if the debt target was reached.

The daylong presentation of targets focused on Jeep SUVs, Ram trucks and premium brands Maserati and Alfa Romeo, which together "comprise the most significant part of our revenues," Marchionne said. Plans for the brands relied heavily on adding electrified powertrains, a technology where Fiat Chrysler has lagged.

Notably absent were the marquee brands: Fiat and Chrysler, which both represent the less-profitable passenger cars currently off consumers' radar, particularly in the United States, where Fiat Chrysler makes more most of its profits, but also in fast-growing China.

The business plan is Marchionne's grand finale, 14 years to the day after he was named Fiat CEO. His tenure has included landmark deals, including the Fiat merger with bankrupt U.S. carmaker Chrysler and the spin-offs the industrial vehicle business and sports carmaker Ferrari.

The 65-year-old Italian-Canadian has his successor as CEO will come from within the company.

In a break from fashion tradition, Marchionne unzipped a knit cardigan to reveal a blue tie — the first, he said, he has worn in a decade. It is a gesture he had promised if Fiat eliminated debt, which he said will happen by the end of the month. Marchionne is famous for unfailingly wearing navy blue cashmere sweaters and never a tie, no matter the event.

Marchionne said debt is "a legacy that has dogged both Fiat and Chrysler for decades," and that erasing it "is a fundamental change in how this company is perceived. It is a significant milestone in the process of healing of a structural weakness."

All new models for the Jeep, Maserati and Alfa Romeo brands launched in the next five years will have some version of electrified powertrains, while eliminating diesels, brand chiefs said in presentations. Truck maker Ram will limit its alternative powertrains to a high-end premium truck, the TRX, which will compete with Ford's Raptor.

Jeep brand chief Mike Manley did not provide a target for 2022 sales, which are currently around 1.9 million vehicles a year. But he said that now one in every 17 utility vehicles sold in the world is a Jeep and he expects that to be one in 12 by 2022.

Meanwhile, the premium brand Alfa Romeo plans to increase annual sales to 400,000 by 2022, having missed a goal this year.

The head of Fiat Chrysler's luxury brand Maserati, Tim Kunsiskis, said the brand aims to compete with Tesla with an all-electric supercar named "Alfieri" that will accelerate from 0-100 kilometers (0-60 miles) an hour in around two seconds. The brand forecasts sales will double from last year to 100,000 cars a year by 2022.

Maserati is entering an exclusive deal with Ferrari for all future powertrains, including hybrid, plug-in hybrid and full-battery electric, while it eliminates diesel engines.

"With an all-electric supercar, it may look like we are targeting Tesla. We are," Kuniskis said.

Bringing Back the Viper

Marchionne: Self-Driving Cars Could be in 5 Years