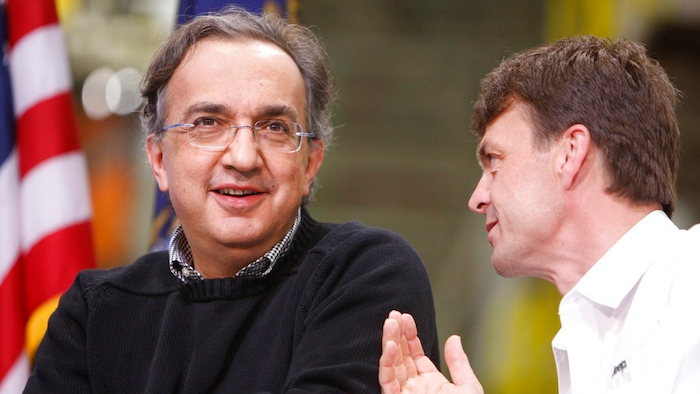 MILAN (AP) — Financial investors sent shares in Fiat Chrysler tumbling 4 percent on Monday as they weighed the potential impact of the accelerated exit of CEO Sergio Marchionne due to serious health issues.

Shares in the Italian-American carmaker were trading at 16.10 euros in volatile trading in Milan. Ferrari, where Marchionne was also replaced at the helm, shed 5 percent to 113.50 euros on opening. The losses weighed on the Milan stock exchange overall, where the heft of FCA pulled down the benchmark FTSE MIB by 1.1 percent.

The FCA board on Saturday named long-time Jeep executive Mike Manley as CEO, unexpectedly accelerating a transition that was planned for early next year. The company said the 66-year-old Marchionne suffered complications from shoulder surgery last month that meant he could not resume his duties. No other details were released.

Manley's first appointment in the role is at a regular FCA executive council meeting in Turin on Monday, and his first public appearance will be to present FCA's second quarter earnings on Wednesday.

Marchionne had announced in his last major presentation to analysts last month that the quarterly results would show FCA at zero debt for the first time -- an occasion for which the normally casually attired Italian-Canadian manager donned a tie -- even if only briefly. The five-year plan included a significant shift to electrified motors.

Marchionne engineered both the turnarounds of Italian carmaker Fiat, which he took over in 2004, and Chrysler, which Fiat acquired in 2009 in a deal with the U.S. government, creating the world's seventh-largest carmaker out of two formerly dysfunctional entities. He created shareholder value for the Fiat founding Agnelli family with successful spinoffs of Fiat's heavy vehicle maker CNH Industrial and of the iconic Ferrari super sports car company. But his goal of another big merger failed to find any takers.

Manley, 54, has been key to transforming the quintessentially American Jeep brand into a global marquee since taking over there in 2009, and he also has been the head of the Ram truck division since 2015. Both brands have formed the leading edge of FCA's North American strategy to move away from passenger car production and focus on SUVs and trucks to meet market demand.

"Although Mr. Manley's public profile has been relatively low and limited to operational matters, he was heavily involved in setting the 2019-22 strategic plan," Philippe Houchois, an analyst at Jeffries Financial Services, said in a note. "We expect continuity." But he also expressed concern that FCA's success has been linked to Marchionne's ability to shift strategy to meet targets.

Bernstein analyst Max Warburton, who had often publicly tussled with Marchionne on earnings calls, said a drop in FCA's shares was to be expected. But he also said shares were "very cheap with not much evidence of a Sergio premium."

"The market knew Sergio was retiring as CEO in early 2019, but some of us assumed he'd remain as chairman and be there to phone in his instructions," Warburton said in a note. He forecast a solid 2019 but said the risks were longer-term.

"Marchionne ran FCA in a command and control style, with constant firefighting measures. There is no operating manual to follow," he said.