As nanotechnology research has demonstrated time and again, the properties of a material can change dramatically at the nanoscale. 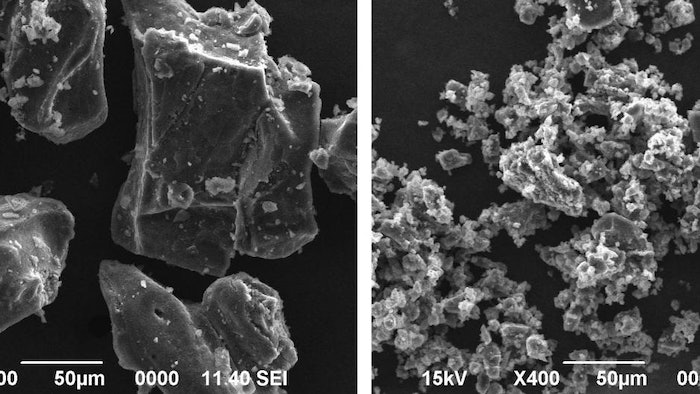 Chunks of this sodium-based compound (Na2B12H12) (left) would function well in a battery only at elevated temperatures, but when they are milled into far smaller pieces (right), they can potentially perform even in extreme cold, making them even more promising as the basis for safer, cheaper rechargeables.
Tohoku University, Japan

By chemically modifying and pulverizing a promising group of compounds, scientists at the National Institute of Standards and Technology (NIST) have potentially brought safer, solid-state rechargeable batteries two steps closer to reality.

These compounds are stable solid materials that would not pose the risks of leaking or catching fire typical of traditional liquid battery ingredients and are made from commonly available substances.

Since discovering their properties in 2014, a team led by NIST scientists has sought to enhance the compounds' performance further in two key ways: Increasing their current-carrying capacity and ensuring that they can operate in a sufficiently wide temperature range to be useful in real-world environments.

Considerable advances have now been made on both fronts, according to Terrence Udovic of the NIST Center for Neutron Research, whose team has published a pair of scientific papers that detail each improvement.

The first advance came when the team found that the original compounds -- made primarily of hydrogen, boron and either lithium or sodium -- were even better at carrying current with a slight change to their chemical makeup. Replacing one of the boron atoms with carbon improved their ability to conduct charged particles, or ions, which are what carry electricity inside a battery. As the team reported in February in their first paper, the switch made the compounds about 10 times better at conducting.

But perhaps more important was clearing the temperature hurdle. The compounds conducted ions well enough to operate in a battery -- as long as it was in an environment typically hotter than boiling water. Unfortunately, there's not much of a market for such high-temperature batteries, and by the time they cooled to room temperature, the materials' favorable chemical structure often changed to a less conductive form, decreasing their performance substantially.

One solution turned out to be crushing the compound's particles into a fine powder. The team had been exploring particles that are measured in micrometers, but as nanotechnology research has demonstrated time and again, the properties of a material can change dramatically at the nanoscale. The team found that pulverizing the compounds into nanometer-scale particles resulted in materials that could still perform well at room temperature and far below.

"This approach can remove worries about whether batteries incorporating these types of materials will perform as expected even on the coldest winter day," says Udovic, whose collaborators on the most recent paper include scientists from Japan's Tohoku University, the University of Maryland and Sandia National Laboratories. "We are currently exploring their use in next-generation batteries, and in the process we hope to convince people of their great potential."