Heavy industry slows, some shut down. 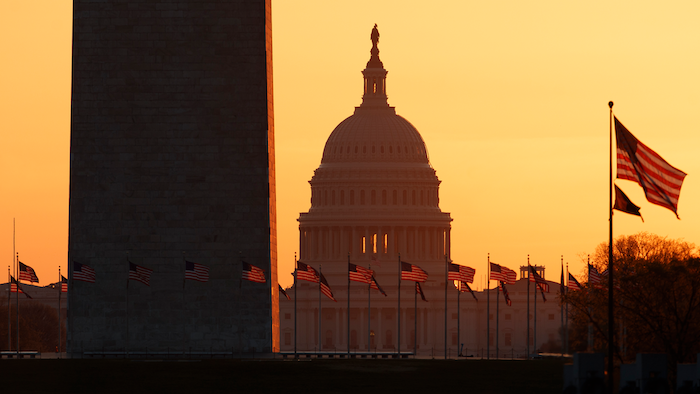 The Washington Monument and the U.S. Capitol are seen in Washington, at sunrise Wednesday, March 18, 2020. The White House has sent Congress an emergency $46 billion spending request for coronavirus-related funding this year.
AP Photo/Carolyn Kaster

NEW YORK (AP) — The number of confirmed cases of the new coronavirus worldwide surpassed 200,000 for the first time Wednesday and the damage being seeded in the global economy is growing more clear. Furloughs and job cuts, from dog walkers, to oilfield workers, have begun. Governments around the world are pushing drastic countermeasures to help workers, particularly those who live paycheck to paycheck.

Following are developments Wednesday affecting various levels of the economy, businesses and workers:

MARKETS: U.S. futures fell hard enough before the opening bell Wednesday that trading was halted, then the Dow tumbled more than 1,000 points at the opening bell. A barrel of crude can be had for less than $25. The last time crude traded at similar levels was May 2003. Long-term government bonds, considered among the safest of places to park money, were discarded. So was gold, despite a U.S. rescue package that could approach $1 trillion.

Markets tumbled in London and Frankfurt, Shanghai and Tokyo. Technology, manufacturing, banks, as well as retail and leisure sectors, are being hammered. Boeing, a global titan of manufacturing, plunged 18% before markets opened Wednesday. It's lost more than 60% of its value in the past month.

The CBOE Volatility Index,Wall Street's fear gauge, appears to have broken from its tether.

Honda said Wednesday that it will shut down plants in North America for a week, starting on Monday because it expects sales to fall. Fiat Chrysler has temporarily closed an assembly plant north of Detroit for a second time in two days after fears that the virus could spread there. The evening shift was sent home Tuesday at the Sterling Heights, Michigan, plant after a worker tested positive for the virus that causes COVID-19. Work resumed early Wednesday, but the company shut the plant down again for deep cleaning “out of an abundance of caution." The plant makes Ram pickup trucks and employs 7,271 hourly workers. Fiat Chrysler said the infected worker had not been in the plant for more than a week.

On Tuesday night Detroit’s three automakers agreed to rotating temporary production suspensions to better clean factories and leave more time between shifts. The move held off a demand from the United Auto Workers for a two-week U.S. production shutdown.

BMW is closing its factories in Europe. It follows Ford, Volkswagen, Renault, Groupe PSA and Fiat Chrysler. It is not only the risk of infection, but the fall-off in demand. Airbus, the global aircraft maker, is halting production in France and Spain for the week.

States and cities that depend heavily on tourism are capitulating, for now. The governor of Hawaii encouraged everyone to postpone vacations there for at least the next 30 days. The governor of Nevada ordered all casinos to close for the month. Major casinos have already ceased operations on the Las Vegas Strip,.

Two cruise ships that have been turned away by other ports are headed to Honolulu. Holland America Line’s Maasdam cruise ship, which had its port call for Hilo, Hawaii canceled, will disembark in Honolulu Harbor, state officials said. The Maasdam, with 842 guests and 542 crew, is scheduled to arrive in Honolulu Friday. Norwegian Cruise Line said that one of its vessels, the Norwegian Jewel with 2,000 aboard, had been turned away by Fiji and New Zealand. It is expected to disembark in Honolulu on Sunday. There are no cases of coronavirus on either ship, said Tim Sakahara, a spokesman for Hawaii’s transportation department.

The leaders of the world’s 20 biggest economies may hold a virtual meeting next week about advancing a coordinated response to the coronavirus pandemic. Saudi Arabia, which currently leads the G20 presidency, said it is communicating with countries to convene the virtual meeting of leaders.

The kingdom said in a statement Wednesday that the Group of 20 countries will act in any way deemed necessary to alleviate the impact of the pandemic and will put forward a coordinated set of policies to protect people and safeguard the global economy.