A nitrogen line ruptured at the aircraft manufacturing facility. 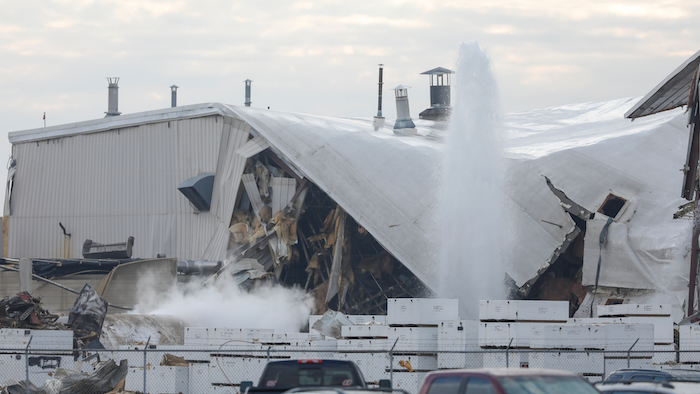 Authorities respond after a partial building collapse at Beechcraft aircraft manufacturing facility in Wichita, Kan., Friday, Dec. 27, 2019. More than a dozen people were injured Friday when a nitrogen line ruptured at the facility, causing part of the building to collapse, authorities said.
Travis Heying/The Wichita Eagle via AP

WICHITA, Kan. (AP) — More than a dozen people were injured Friday when a nitrogen line ruptured at the Beechcraft aircraft manufacturing facility in Wichita, Kansas, causing part of the building to collapse, authorities said.

Daniel Wegner, deputy fire chief for Sedgwick County, said the explosion happened at around 8 a.m. at the facility, which is in the eastern part of the city. John Gallagher, the county's emergency medical services director, said 11 people were taken to hospitals and four were treated at the scene. No one was killed, but one person has potentially serious injuries, he said.

Worker Robert Baker said he was inside the building when the explosion occurred but was on the opposite side of the facility. He told The Wichita Eagle that he saw the walls flex.

“There was dust and debris, even from the other side," said Baker, 36, who has worked at the plant for about a month. “Dirt in the air permeating through the walls coming down the hallways and stuff like that.”

He added: “That was the most scared I’ve ever been in my whole life, and I’m not easily rattled. But when the walls start flexing and it sounds like the roof is about to cave in, I get pretty panicked and scared.”

Joel Schepis, who lives in a neighborhood west of the Beechcraft plant, said the the explosion rattled his house and dust and debris fell through cracks in his ceiling.

“If you’ve ever been to an airshow, it sounded like a sonic boom,” he said.

The explosion was felt more than 5 miles (8.05 kilometers) to the northwest, The Eagle reported.

Roz Hutchinson, a spokeswoman for the Ascension Via Christi health system, said nine people were taken to its St. Francis hospital in Wichita.

Four others were released after being treated, and another was expected to be released, Hutchinson said.

Stephanie Harder, a spokeswoman for Beechcraft's parent company, Textron Aviation, said that the company has accounted for all of the workers and visitors who were at the plant at the time of the explosion.

Investigators are working to determine what caused the explosion. Another Textron spokeswoman, Sarah White, said the company also is investigating the effect of the explosion on the company's facilities.

“Textron Aviation’s first concern is tending to the safety and security of our people," White said.

Wegner said the explosion happened when a 3-inch (7.6-centimeter) liquid nitrogen line ruptured. The rupture was contained, but gas continued to vent, although it posed no risk to nearby residents, officials said.

"The plant closed or shut down for the holiday season so the numbers that would have been here, were not, so it was a skeleton crew," Wegner said.

The cause of the blast is under investigation.

The explosion comes at a difficult time for the aircraft industry in Wichita, which is a major sector of the Kansas economy.

Boeing announced that it would suspend production of its troubled 737 Max jetliner in January, forcing the state to consider helping to pay workers at Spirit AeroSystems, which produces the jet's fuselages. And earlier this month, Textron Aviation announced that it would lay off an unspecified number of workers, most of them in Wichita.

Harder said the structure where the explosion happened is part of a complex of buildings and houses the business' composite manufacturing and experimental aircraft.

The federal Occupational Safety and Health Administration is at the plant, said Sedgwick County Sheriff Jeff Easter. The state Fire Marshal's Office and the local lodge of the International Association of Machinists and Aerospace Workers didn't immediately respond to phone messages.