The Broken Promise of Brazil’s Mega-Dam

In the shadow of the dam, development for the national good is a perspective lost on local communities. 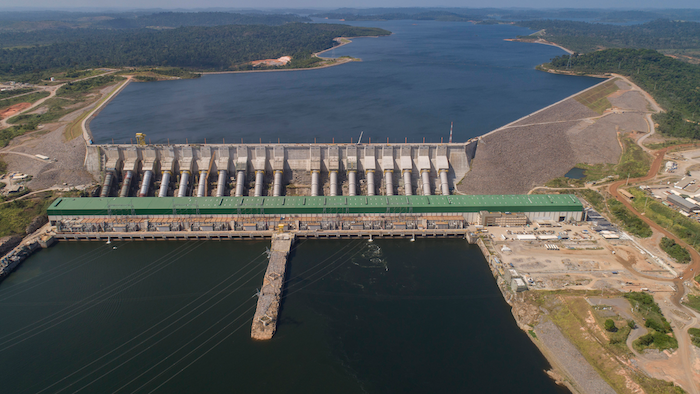 The Belo Monte hydroelectric dam stands in the Xingu River in Altamira, Para state, Brazil, Friday, Sept. 6, 2019. With the start of full-scale operations three weeks ago, debate over its legacy, and whether its construction was worth local sacrifice, is coming into focus.
AP Photo/Andre Penner

ALTAMIRA, Brazil (AP) — Edizangela Alves Barros believed that being forced to relocate to make way for a mammoth dam in Brazil’s Amazon would mean a brighter future for her family.

Instead, their newly built settlement has more expensive electricity bills and intermittent public lighting -- a cruel irony for a community just 40 kilometers (25 miles) from the world’s third-biggest hydroelectric dam.

“We left our wooden houses to live in concrete houses, but our economic situation got worse,” Alves Barros, a mother of five, said in an interview.

She used to live by the Xingu River. Today, it is the site of the Belo Monte dam, a colossus built with enough concrete and steel to make 22 Eiffel Towers. Boats crossing the river beside it look like toys.

Belo Monte was conceived to bolster Brazil's faltering electrical grid. And three weeks into full operation, the dam has been a boon — at least to the people in cities more than 2,400 kilometers (1,500 miles) away.

There is a different view in the region where the dam was built. The project displaced some 40,000 people, according to civil society estimates, and it has dried up stretches of the Xingu River. Critics also say that promises of jobs and economic development to accompany the dam weren't met.

“There were a lot of promises — generate jobs, the region’s economy was going to grow,” said Sabrina Mesquita do Nascimento, a researcher with the Federal University of Para’s Center for Advanced Amazonian Studies, who has spent years studying Belo Monte.

The promises either didn’t materialize or evaporated once construction ended, she said.

“It was an ephemeral relationship. All the damages fell to these people,” do Nascimento said.

Sitting in the northern state of Para, Belo Monte has the capacity to generate 11.2 gigawatts of power, less only than China’s Three Gorges and Itaipu on Brazil’s border with Paraguay. It required excavating a canal larger than the Panama Canal.

Entrepreneurs saw opportunity, and job seekers flocked to Altamira seeking one of the 60,000 promised positions, which sent the city's population surging.

Residents who fished and bathed in the Xingu saw their lives take a dramtic turn.

One was Jair Teixeira da Costa, a fisherman who lives in a small wooden house with a makeshift dock where he plays with his six dogs. Today, fish are scarce and he picks up odd jobs to make ends meet. That isn’t what he expected after hearing the plans outlined by the dam’s builder for preserving local communities’ customs.

Federal prosecutors have carried out 27 different investigations focused on Belo Monte. Among other things, they have accusedcompanies and public agencies of not performing mandatory consultations with indigenous communities, or not fulfilling pledges to implement basic sewage for area residents.

In an email to The Associated Press, Norte Energia said local families eat more than three times the amount of fish suggested by the World Health Organization, and stressed that they had created a “cooperative” of fishermen to mitigate impacts on the river.

Norte Energia also said it did not force indigenous communities to relocate.

“The construction company didn’t work out, not at all. It was just promises,” said da Costa, who is still waiting to get electricity in his home.

A world away, in Rio de Janeiro, beachgoers on Ipanema applaud the sunset every evening. Lights come on across the city, illuminating the Christ the Redeemer statue, the Maracana soccer stadium and homes of 13 million city dwellers.

Few Rio residents realize their televisions and washing machines draw some power from the distant mega-dam. Recently, Belo Monte has been sending power along the world's longest 800 kilovolt transmission line, which snakes for 2,534 kilometers (1,574 miles) through 81 cities and three ecosystems to a substation in Rio state.

The line to Rio state isn’t a straight shot. The local subsidiary of a Chinese state-owned company built it with 435 kilometers (270 miles) of detours to avoid crossing indigenous land and keep local communities on board, said Anselmo Leal, vice president at State Grid Holding Brazil. The company also raised towers above tree-level to avoid cutting down a 120 yard-wide strip of forest along the way.

“People would be shocked at the amount of effort and investment that is necessary to give us the comfort of our daily lives,” Leal said at the company’s building in Rio’s city center.

Transmission line construction was impeded by 2017 protests in Para state, and Brazil's government deployed National Guard troops to ensure no delays in work that was considered essential for growth of the country's economy.

Brazil suffered big blackouts before 2010, some of them caused by faults at power plants. In 2009, a power failure threw Brazil’s two largest cities into darkness, affecting millions.

People living in Brazil’s biggest cities are largely unaware of Belo Monte's impact on the region where it was built.

That’s because the wealthier southeast operates under an illusion of self-sufficiency, said Luiz Novoa, a professor at the Federal University of Rondonia who leads a research group on Amazon territories. They feel removed from Amazon exploitation -- whether a massive iron mine’s exports or Belo Monte’s energy, he said.

“Those excesses make their lives operate well in the metropolis, but they don't understand where it comes from, the socioeconomic cost of it,” Novoa said.

Belo Monte caused pain for local communities that has only worsened as construction dust settled, said Marco Santana, a lawyer who has represented some of the people relocated.

Altamira’s population has surged 48%, to 115,000 people from 77,000 in 2000. The loss of jobs brought by the dam’s construction fueled an explosion in violence, experts believe.

“People lost their jobs and the city became a breeding ground for social problems,” Santana said.

In 2008, before construction began, Altamira’s homicide rate was 36 per 100,000 residents. By 2018, the rate almost quadrupled, making it Brazil’s second-most violent city.

Hotels built to accommodate the once-booming workforce are empty, many small local companies have shuttered, and larger firms are caught up in the sprawling “Car Wash" corruption probe that revealed bribery in Brazil’s construction sector.

Still, maximum generation is lacking given low rainfall roughly half the year, and the fact that the plant was built with a “run of river" model rather than with a reservoir as a concession to environmentalists, said Adriano Pires, director of infrastructure consulting firm CBIE.

That being the case, the company that operates the dam, Norte Energia, is evaluating construction of a natural gas-fired power plant on the site, the newspaper Estado de S. Paulo reported last week. Norte Energia told The Associated Press in an emailed response only that it is developing projects to expand the power sector, without providing details.

“If there hadn’t been a Belo Monte, the risk of (Brazil) lacking energy would have been enormous,” Pires said by phone. “Even with all its problems, it is a project that will help the Brazilian electricity sector very much.”

In the shadow of the dam, development for the national good is a perspective lost on local communities. The government and companies paid lip service to helping residents, who found their own voices stifled as they were stuck with hardship, critics say.

“A lot of money came through here,” said Alves Barros, the woman who was forced to resettle. “Nothing remained that was permanent, that was concrete.”