Carlos Ghosn is out on bail but is not allowed contact with his wife, Carole. 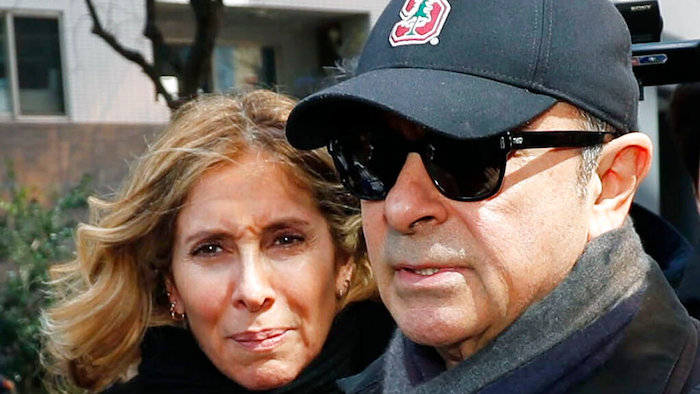 TOKYO (AP) — The wife of former Nissan Chairman Carlos Ghosn is protesting restrictions on contacting her husband as he awaits trial in Japan on financial misconduct allegations, calling them a human rights violation.

Carole Ghosn said Tuesday the family's fifth appeal to gain visitation rights was refused by a Tokyo court without any explanation.

Prosecutors have said they sought the restrictions to prevent evidence tampering and collusion to create false narratives.

Ghosn, arrested in November, is out on bail. He says he is innocent.

Carole Ghosn said she has not been allowed to communicate with him for 124 days and denounced the restrictions as a violation of "our basic human rights."

The restrictions were part of Ghosn's bail conditions when he was released from detention for a second time in April. An earlier appeal of the restrictions went to the Supreme Court but was turned down.

"This cruel separation with no end in sight is further evidence of his persecution under Japan's hostage justice system. It is a vicious retaliation designed to break him," Carole Ghosn said in a statement.

She said she has not been allowed any contact with her husband, including phone calls or emails. He is allowed to see his children, but prosecutors appear to believe she has connections with various people they suspect to be linked to the allegations. She has been questioned by a judge, but has not been charged.

A representative of the family said the latest appeal included a request for the couple to spend a weekend together. Ghosn's lawyer, Takashi Takano, has said earlier appeals included requests for them to see each other in the presence of lawyers.

Carlos Ghosn, who led major Japanese automaker Nissan Motor Co. for two decades, has been charged with falsifying financial documents on retirement compensation and with breach of trust in diverting Nissan money toward personal investment losses and a company effectively run by him.

A date for his trial has not been set. It is routine in Japan for preparations for trials to take months.

Carole Ghosn said she is looking forward to the trial and to "the day he is vindicated and our family is reunited."

Nissan has dismissed Ghosn from its board and has promised to strengthen corporate governance.

The automaker's profit has plummeted, and questions are growing about the future of its alliance with French partner Renault. Ghosn, who was sent in by Renault, had been a major figure in the alliance.

Last month, Nissan announced it was slashing 12,500 jobs or about 9% of its global workforce to cut costs and achieve a turnaround.