Two 500-foot cooling towers reduced to rubble in a matter of seconds. 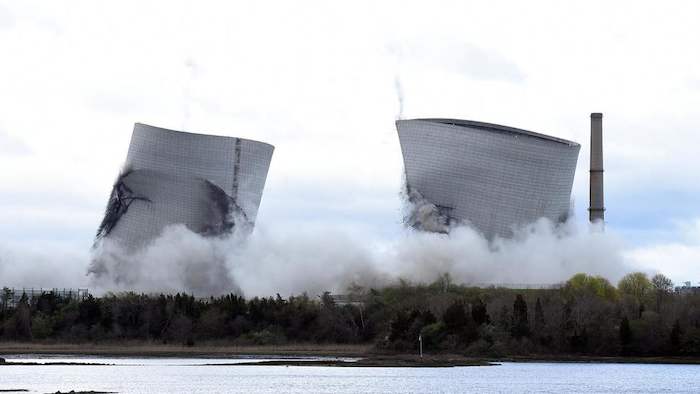 The two 500-foot cooling towers of the former Brayton Point Station collapse after explosive charges are detonated in Somerset, Mass., on Saturday, April 27, 2019. The plant had burned coal since 1963. By the time it stopped producing power in 2017, it was the last coal-fired plant in Massachusetts.
Dave Souza/The Herald News of Fall River via AP

SOMERSET, MASS. (AP) — In a matter of seconds, two 500-foot cooling towers from Massachusetts' last coal-fired power plant have been reduced to rubble.

The controlled demolition went off as scheduled at 8 a.m. Saturday at the former Brayton Point Station in Somerset. Live video showed the giant towers along Mount Hope Bay implode and a large cloud of dust rise into the air.

The plant had burned coal since 1963. It closed in 2017 as environmental groups pushed for cleaner sources of energy generation.

The new owners of the property plan to turn the site into a multi-use facility mainly dedicated to supporting off-shore wind farms.