Vermont Yankee closed in 2014 after operating for 42 years.

VERNON, VT. (AP) — The owner of the closed Vermont Yankee nuclear power plant says it has completed the sale of the plant to a demolition company.

Entergy Corp. said the sale to subsidiaries of Northstar Group Services was completed on Friday.

The Vermont Public Utility Commission said the primary benefit was that the New York-based Northstar planned to start decommissioning the plant no later than 2021, decades sooner than Entergy planned.

Entergy says the sale to a company expected to do timely and efficient decommissioning is a "first of its kind" in the nuclear power industry.

Vermont Yankee closed in 2014 after operating for 42 years. 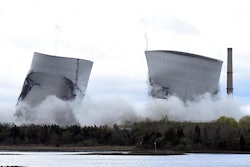