Workers are being exposed to radiation as they tear down buildings that helped create the nation's nuclear arsenal. 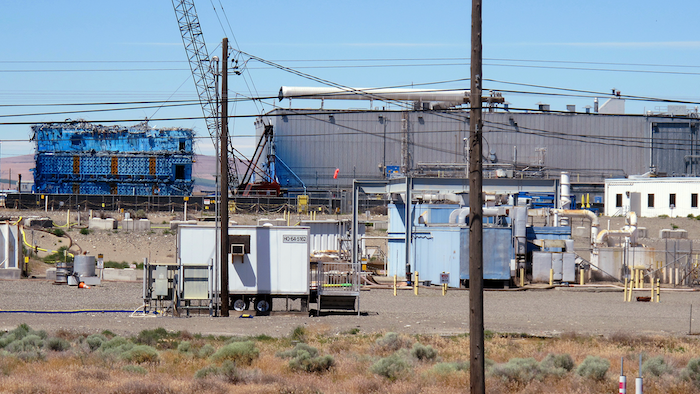 This May 13, 2017, photo shows a portion of the Plutonium Finishing Plant on the Hanford Nuclear Reservation near Richland, Wash. Officials say dozens of workers demolishing the 1940s-era plutonium processing plant there have ingested or inhaled radioactive particles in the past year, prompting a halt to the demolition of the plant until a safe plan can be developed.
AP Photo/Nicholas K. Geranios

SPOKANE, Wash. (AP) — Seven decades after making key portions of the atomic bomb dropped on Nagasaki, Japan, workers at the Hanford Nuclear Reservation are being exposed to radiation as they tear down buildings that helped create the nation's nuclear arsenal.

Dozens of workers demolishing a plutonium processing plant from the 1940s have inhaled or ingested radioactive particles in the past year, and even carried some of that radiation into their vehicles, according to the U.S. Department of Energy.

The incidents have prompted the federal government, along with state regulators, to halt the demolition of the sprawling Plutonium Finishing Plant until a safe plan can be developed.

The contamination has also shaken confidence in a massive cleanup of Hanford, the nation's most polluted nuclear weapons production site. The work costs the federal treasury around $2 billion a year. Hanford is near the city of Richland, about 200 miles (320 kilometers) southeast of Seattle.

"This is a very disturbing set of incidents," said Tom Carpenter, head of the Seattle-based watchdog group Hanford Challenge.

The Energy Department, which owns Hanford, has launched an independent investigation into the spread of radiation at the plant. The investigation will be conducted by an agency office that is not connected to work at Hanford.

Radioactive particles are known to have contaminated 42 workers, which led to the shutdown of demolition, the agency has said.

Carpenter said widespread worker contamination has been rare at Hanford in recent decades. Plutonium production ended in the 1980s and the site in 1989 switched its focus to cleanup of nuclear wastes.

"It's one of the more serious events to happen in the age of cleanup at Hanford," Carpenter said. "There have been other incidents, but none rose to the level of plutonium contamination of this many people and private vehicles and being found miles and miles away."

A union representing some Hanford workers said it was closely monitoring the situation.

"We've got our eyes on (the Energy Department) and will do what we've got to do to keep workers safe," said Paul Ruggles, vice-president of the Hanford Atomic Metal Trades Council.

Workers have the ability to immediately shut a project down, and will not hesitate to do so if their safety is threatened, Ruggles said.

Hanford officials issued a report in late March that said a total of 42 Hanford workers inhaled or ingested radioactive particles from demolition of the Plutonium Finishing Plant when they were exposed during contamination events in June and December of last year.

Radioactive contamination was also found outside plant offices and inside two dozen vehicles, the report said.

Seven workers' homes were checked for radioactive contamination, with none found, the report said.

The report concluded Hanford officials placed too much reliance on air-monitoring systems that failed to pick up the spread of radioactive particles.

Managers of the private contractor performing the demolition work for the federal government were also caught between maintaining safety and trying to make progress toward project deadlines, according to the report.

Risk escalated as walls of the plutonium plant were knocked down and the rubble was stored in piles. Fixatives sprayed on the rubble to keep radioactive particles from blowing away may not have been effective, the report said.

In addition, the state Health Department found very small amounts of airborne radioactive contamination near Highway 240 in the past year that could have come from the plant demolition 10 miles (16 kilometers) away.

The amount of radiation involved was low — even lower than naturally occurring levels of radiation people are exposed to in everyday life. But the project was not supposed to expose workers to any additional radiation. The amounts of radiation that have escaped are considered too small by state experts to pose a health risk. All the contamination was found on lands that are closed to the public.

Hanford was created during the Manhattan Project in World War II and made the plutonium for the atomic bomb dropped on Nagasaki, Japan, that effectively ended the war. The Plutonium Finishing Plant was constructed a few years later, and helped process most of the plutonium for the nation's nuclear arsenal. The plant took liquid plutonium and shaped it into hockey puck-sized disks for use in nuclear warheads.

Demolition on the plant began in late 2016.

Carpenter complained that the Energy Department did not act quickly to contain the contamination after the June incident in which radioactive particles escaped and traces were found inside 31 workers. Eleven more workers were found to be contaminated after the December incident, which prompted the government to shut down demolition.

Carpenter expected there would be more incidents of radiation escaping into the environment.

"Hanford is a very contaminated site that has lots of old facilities that are getting older," Carpenter said. "That's a bad combination."

The Washington Department of Ecology, which along with the U.S. Environmental Protection Agency regulates Hanford cleanup, said the two agencies will not yet allow demolition work to resume at the plant.

"We're not convinced that Energy has adequate safeguards or monitoring in place to ensure safe operations," the Ecology Department said in a press release. "This clearly is unacceptable for worker and public health and safety."

The state Health Department said there is presently no threat to public health from the releases.

"However, we are concerned if work resumes without better controls, a risk to the public may develop," the agency said in a recent letter to Hanford managers.