The clean up efforts were hamstrung by a reignited fire at the chemical plant. 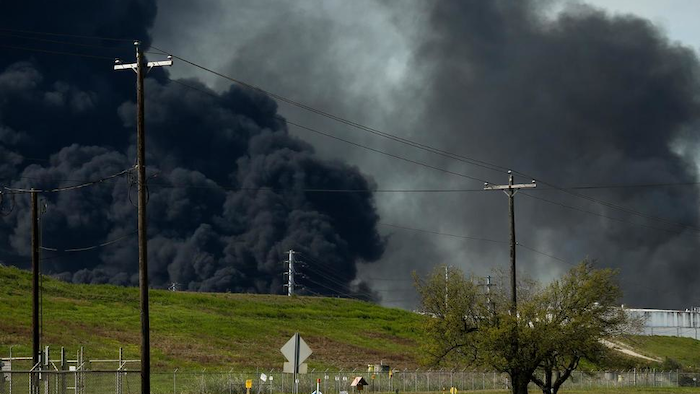 The petrochemical fire at Intercontinental Terminals Company reignited as crews tried to clean out the chemicals that remained in the tanks Friday, March 22, 2019, in Deer Park, Texas. The efforts to clean up a Texas industrial plant that burned for several days this week were hamstrung Friday by a briefly reignited fire and a breach that led to chemicals spilling into the nearby Houston Ship Channel.
Godofredo A. Vasquez/Houston Chronicle via AP

HOUSTON (AP) — The efforts to clean up a Texas industrial plant that burned for several days this week were hamstrung Friday by a briefly reignited fire and a breach that led to chemicals spilling into the nearby Houston Ship Channel.

The Texas attorney general also filed a lawsuit against Intercontinental Terminals Company, which operates the petrochemical tank farm east of Houston. Attorney General Ken Paxton said Texas had to hold the company "accountable for the damage it has done to our environment."

"ITC has a history of environmental violations, and this latest incident is especially disturbing and frightening," Paxton said in a statement. "No company can be allowed to disrupt lives and put public health and safety at risk."

An ITC spokeswoman said the company would not comment on pending litigation.

While the new fire was extinguished about an hour after it began Friday afternoon, the spillage of chemicals led the U.S. Coast Guard to close part of the ship channel, a critical commercial waterway that connects oil refineries between the Port of Houston and the Gulf of Mexico.

Among the chemicals released into the air this week were benzene, which evaporates quickly and can cause drowsiness, dizziness, rapid heartbeat, and headaches, with worse symptoms at higher levels of exposure.

Crews on Friday continued to drain an estimated 20,000 barrels of chemicals from a tank damaged in the fire that began Sunday and was initially put out on Wednesday . A foam layer was reapplied to keep the chemicals contained.

The Coast Guard eventually closed the ship channel in the nearby area to prevent the spread of what a spokesman said was a mix of chemicals, foam, and soot from the fire.

Just before 4 p.m., another fire broke out, emitting more large plumes of black smoke. Samuelsen said the fire was extinguished by 5 p.m., though some smoke was still visible shortly afterward.

After the dike breach, the company asked neighboring industrial sites and the nearby San Jacinto Texas State Historic Site to shelter in place. Authorities did not extend that order to residents. People living near the plant in Deer Park were told Thursday to remain indoors after air monitors detected elevated levels of benzene. That order was lifted later Thursday.

Adam Adams of the Environmental Protection Agency said air tests by the EPA and the company had not shown any positive results for high levels of benzene. One positive test after 4 a.m. from a sensor operated by Harris County was verified to be a false alarm, a county spokeswoman said.

The Harris County fire marshal's office said it continued to investigate the origin and cause of the fire with the help of federal authorities.

"This incident has captured the attention of the nation and beyond, with many questions being asked why and how this incident occurred," Harris County Fire Marshal Laurie L. Christensen said in a statement.

No Timetable for End to Fire