Courtrooms are where much of the saga some call "South Carolina's nuclear boondoggle" will unfold. 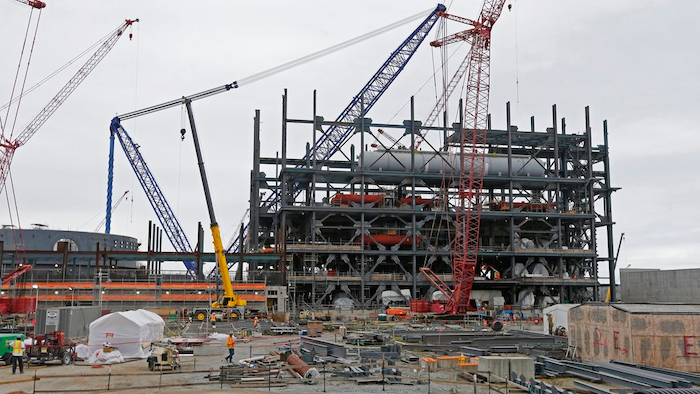 In this Sept. 21, 2016, file photo, V.C. Summer Nuclear Station's unit two's turbine is under construction near Jenkinsville, S.C., during a media tour of the facility. Construction on the unit was stopped in July 2017 before it generated any power.
AP Photo/Chuck Burton, File

COLUMBIA, S.C. (AP) — In the 12 muddled months since the abandonment of two South Carolina nuclear reactors that never produced a watt of power, only one thing seems certain: it will take a lot of litigation to untangle the mess.

Courtrooms are where much of the saga some call "South Carolina's nuclear boondoggle" will unfold.

South Carolina Electric & Gas Co. and state-owned utility Santee Cooper spent more than $9 billion before abandoning construction on the reactors at the V.C. Summer Nuclear Station near Columbia last year. State and federal authorities are probing the failure, and irate customers and shareholders have filed lawsuits.

"We're just at the end of the beginning," said Lynn Teague, vice president of the League of Women Voters in South Carolina who has made protecting ratepayers her goal since noticing things weren't going right for the projects three years ago.

Customers of SCE&G, a SCANA subsidiary, got a temporary 15 percent rate cut. But even the rate cut isn't on bills yet. Four months of cuts are supposed to show up in August. SCE&G is asking a federal court to stop it, but a judge hasn't taken up the request.

There is also a likely showdown ahead between Gov. Henry McMaster and the state Senate about whether the governor's pick to run the board of state-owned Santee Cooper can start immediately without Senate approval. And there are ongoing criminal investigations of potential wrongdoing.

The complexity in unraveling the mess is in part because the two different utilities involved. SCE&G is privately owned with shareholders able to shoulder the loss. Dominion Energy in Virginia appears to be working toward a merger with SCE&G that is awaiting approval.

Santee Cooper is owned by the state and its holdings include land and lakes as well as the power grid. The utility the chief provider for power for the tinier co-ops that serve some of the most remote areas of South Carolina. The utility's debt — which includes more than just the billions poured into the failed nuclear reactors — is around $8 billion or roughly equal to the annual state budget.

Because of the debt, South Carolina lawmakers have created a committee to study selling Santee Cooper, an idea wholeheartedly supported by McMaster, who used his one appointment to the panel to appoint himself.

McMaster also chose former state Attorney General Charlie Condon to be the new chairman of the Santee Cooper board. But the Senate did not vote on Condon's appointment before adjourning in June. McMaster said a state law allows him to put Condon in place now without a vote. Senate leaders said no and the dispute is probably heading to court.

Amid all the problems, there are lawmakers and experts who believe the nuclear fiasco could spur change. South Carolina could shed pursuit of massive plants that produce more and more energy and instead focus on developing energy storage and renewable power and allowing competition. Republican Sen. Wes Climer of Rock Hill said lawmakers must act carefully but also take advantage of this opportunity.

"We got out the paddles and kept the patient from dying. We did CPR," Climer said of the past year in the Legislature. "Now we need to nurse him back to health."

But experts predict whether Santee Cooper is sold or not, rates are going up for its customers. The average Santee Cooper customer pays $130 a month, while SCE&G customers pay some of the highest rates in the nation at $163 a month, based on power usage statstics.

"They had three to four billion of state assets and they go up there and they put money in the hole and now, of course, they're not going to go under because they have a captive audience," Condon told lawmakers considering his appointment in April. "But is that fair to all concerned? I think not."