The deal gives Dominion — already one of the nation's largest utility companies — more of a foothold in South Carolina. 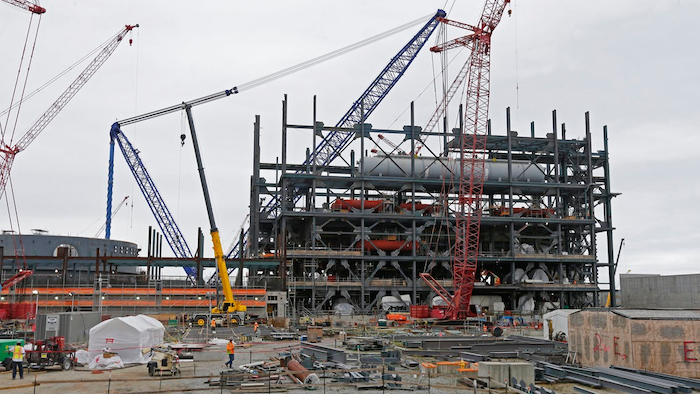 In this Sept. 21, 2016, file photo, V.C. Summer Nuclear Station's unit two's turbine is under construction near Jenkinsville, S.C., during a media tour of the facility. Construction on the unit was stopped in July 2017 before it generated any power.
AP Photo/Chuck Burton, File

COLUMBIA, S.C. (AP) — Shareholders of SCANA agreed Tuesday to sell the South Carolina utility to Virginia-based Dominion Energy, which has agreed to swallow billions of dollars in debt from the company's failed nuclear construction project and other operations.

The deal gives Dominion — already one of the nation's largest utility companies — more of a foothold in South Carolina. The Richmond company already operates a pair of solar farms in the state, as well as gas pipelines purchased from SCANA in years past.

SCANA has about 1.6 million electric and natural gas residential and business accounts in the Carolinas. The combined company would operate in 18 states, providing energy to about 6.5 million regulated customer accounts.

SCANA suddenly needed a buyer after spending $5 billion to plan and build a pair of reactors, a project abandoned a year ago Tuesday at the V.C. Summer Nuclear Station in Fairfield County. SCANA has been reeling since the debacle, which left thousands jobless. The project's co-owner, state-owned utility Santee Cooper, also has been wrestling with how to shoulder its stake in the failure.

The failure spawned lawsuits from irate ratepayers alleging company officials knew the project was doomed but lied about its viability. State and federal authorities are also investigating possible wrongdoing on behalf of top SCANA executives, some of whom have departed the company in the past year.

State lawmakers wrestled with the fallout during this year's session, ultimately passing legislation to temporarily slash the percentage SCE&G customers pay toward the company's debt in the defunct project by 15 percent. The company has gone to court to stop that reduction — effective only through the end of this year — saying a 2007 law allowed it to charge for the project even though it never generated power.

Dominion had warned it might pull the purchase offer if the rate cuts passed, later backing off those threats and expressing regret that a permanent rate solution hadn't been put into place.

In the deal, Dominion is offering more than $1 billion in rebates to customers of SCANA subsidiary South Carolina Electric & Gas Co., as well as rate cuts of about 7 percent, as well as a promise not to raise rates for three years. Dominion would also write off about $1.7 billion in remaining project costs in the plan, which ends ratepayers' payments toward the project in around 20 years instead of 50 to 60.

The day the abandonment was announced, SCANA stock was trading just above $64 a share. After Tuesday afternoon trading, shares were listed at around $40. SCANA shareholders will receive 0.6690 shares of Dominion common stock for each share of SCANA under the stock deal. Dominion values its purchase at about $7.9 billion, with an additional $6.7 billion in assumed debt.

Around 100 shareholders met in Columbia to approve the deal. If approved by regulators, SCANA becomes a wholly owned subsidiary of Dominion. The deal also anticipates the completion of the $180 million purchase of a 540-megawatt natural gas-fired power plant, a proposal announced by SCE&G President Keller Kissam in November.

"This combination can open new expansion opportunities, including the Atlantic Coast Pipeline that is now under development, bringing lower-cost natural gas to the region," Farrell said earlier this year.