Following his sudden death last week, the revelation that Marchionne had kept his illness from his company rekindled a debate over what information top executives should share. 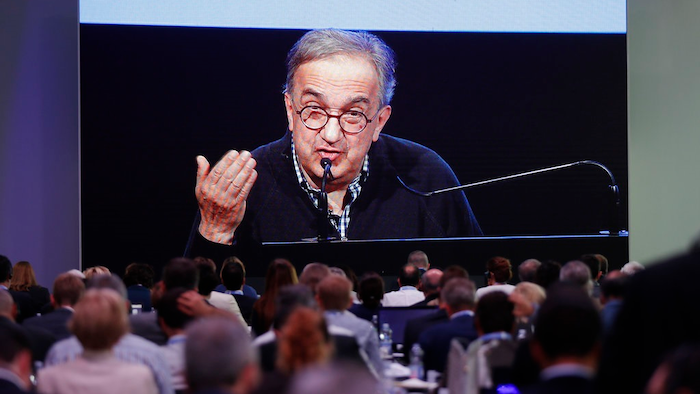 In this June 1, 2018, file photo, journalists watch a giant screen as Fiat Chrysler CEO Sergio Marchionne speaks during the 'Capital market day' at the FCA headquarters in Balocco, Italy. Fiat Chrysler’s late founding CEO Sergio Marchionne was a notorious workaholic who regularly slept on a corporate jet all the while landing in headlines for his shrewd deal-making. Despite his public profile, he kept a secret even from his board: he’d been seriously ill for more than a year.
AP Photo/Luca Bruno

MILAN (AP) — Fiat Chrysler's late founding CEO Sergio Marchionne was a notorious workaholic who regularly slept on a corporate jet while landing in the headlines for his shrewd deal-making. Despite his very public profile, he kept a secret even from his board: he'd been seriously ill for more than a year.

Following his sudden death last week at 66, the revelation that Marchionne had kept his illness from his company and closest executives for so long has rekindled a debate over what information top executives should share about their personal life with their companies and shareholders.

Most experts believe CEOs have a right to privacy, especially where their health is concerned. But some say that coming forward would help break taboos on workplace illness for other executives and workers. Top executives also need to take into account their role as a corporate officer when weighing what personal information they divulge — first to their boards, then to their workers and the wider investing community.

"I think it is classic stuff really. When you are a senior person, to be ill, there is a stigma to it," said Cary Cooper, an expert in organizational psychology and health at the Manchester Business School in Britain. "In this case, he might have thought it would adversely affect the company, or that he wouldn't be allowed to carry on."

Cooper noted that the CEO of Lloyd's Bank, Antonio Horta-Osorio, had disclosed his struggle with depression, helping to open up a discussion about mental health. At the same time, many captains of industry are not willing to show their physical limits and see illness as just another obstacle to overcome.

"The kind of people who get to the top are pretty resilient people, and they think they are going to overcome it anyway," Cooper said.

Marchionne's case was unique because he was singularly identified with the automaker he created from two failing companies. Financial analysts, considering his plans to step down in the spring of 2019, had already expressed concern about whether any successor would be able to demonstrate his level of creativity and flexibility, most recently when Marchionne last month laid out the carmaker's five-year plan.

Jason Schloetzer, a business administration professor at Georgetown University, said he does not believe CEOs are under any legal obligation to disclose their health issues. But he added: "It would be nice for there to be an internal process through which not just the CEO, but any key member of the operating team can feel comfortable sharing personal issues that may be a risk factor to company performance."

While the FCA board acted swiftly to replace Marchionne as CEO on July 21 after being told by his family that he could not return to work due to complications after shoulder surgery, the Swiss hospital where he died Wednesday later disclosed that he had been receiving cutting-edge treatment there for a serious illness for more than a year.

Fiat Chrysler reacted to the disclosure with a statement saying the company had been unaware of the longer-standing state of Marchionne's health, having only been informed of the shoulder surgery last month.

In the week from news of Marchionne's illness to his death, Fiat Chrysler shed nearly 11 percent on the Milan Stock Exchange amid volatile trading. The stock lost 9 percent in the same period the New York Stock Exchange.

As far as Italy's market regulator, Consob, is concerned, the FCA board acted properly by replacing Marchionne as soon as it had word. He was also replaced that day as CEO of Ferrari and as chairman of CNH Industrial.

Peter Henning, a former lawyer for the U.S. Securities and Exchange Commission, said SEC action is unlikely, as there's no clear rule about what a company is supposed to disclose about a CEO's health.

"It's an interesting question, about where do you draw the line between public disclosure and an individual's privacy? And the SEC has not weighed in on this, unless there is a misleading disclosure. Otherwise, the SEC is going to defer to the company," Henning said.

At the same time, Jeffrey Sonnenfeld, senior associate dean for leadership studies at Yale School of Management, said CEOs have "a moral, ethical and legal responsibility ... as an officer of the company to consider the material adverse consequences of this very important information. As an officer, you surrender some degree of privacy."

Sonnenfeld said that includes not only disclosing who you do business and meet with but also health issues. He said it's up to corporate boards to have rules in place about health disclosures.

He cited JP Morgan CEO Jamie Dimon and Goldman Sachs CEO Lloyd Blankfein — both of whom informed their boards and employees of their cancer diagnosis, continuing full duties after treatment — as two good models. Apple, on the other hand, knew about Steve Jobs' illness "but put out misinformation" when the founding CEO failed to show up at MacWorld in 2008, Sonnenfeld said.

"That was worse than spins. It was falsehoods," he said.

Doug Chia, executive director of the governance center at the Confidence Board think tank, said the lesson from the Marchionne case is that boards need to think about having "some kind of procedure where there is some periodic checkup on the CEO's health, or some kind of advanced agreement that the CEO will let them know about medical information."

Giuseppe Berta, who has written books about Fiat and Fiat Chrysler and who knew Marchionne, expressed surprise that heir to the Fiat-founding Agnelli family, FCA Chairman John Elkann, had not known about Marchionne's illness.

"Evidently, the ties between Marchionne the manager and John Elkann the shareholder were by now very deteriorated," Berta said. "Under normal circumstances, something of this sort would emerge."

While Marchionne had put Fiat Chrysler on a strong financial footing, having eliminated debt as long promised, Berta said hewing to that goal also meant that the carmaker did not make the investments in new products that competitors did, including for electric cars and looking ahead to greater automotive connectivity and autonomous driving. Berta speculated it was Marchionne's desire to put the company on firmer ground to meet the goals in the 5-year-plan he laid out on June 1 that led him to hide his illness.

Such gestures, however, are useless hubris, experts say.

"Nobody — and I mean nobody — is indispensable," Cooper said. "Everyone said 'What is going to happen to Apple after Steve Jobs?' Has it done badly?"

Why Marchionne Stood Out

Fiat Chrysler CEO to Step Down