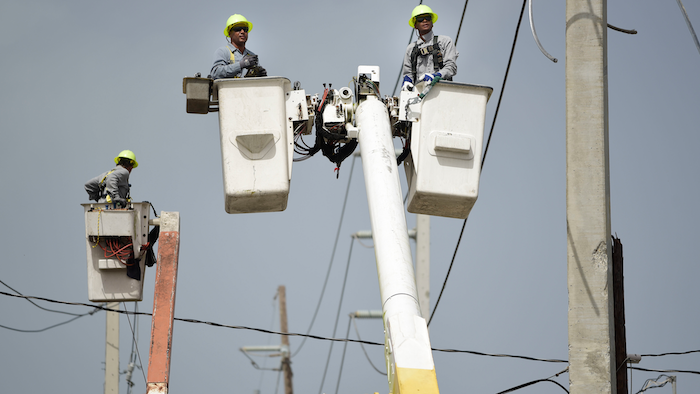 In this Oct. 19, 2017 file photo, a brigade from the Electric Power Authority repairs distribution lines damaged by Hurricane Maria in the Cantera community of San Juan, Puerto Rico. Jose Ortiz will take over Puerto Rico's Electric Power Authority on July 23, 2018, the company's second CEO in two weeks as it struggles with leadership issues, bankruptcy and the restoration of electricity to hundreds who have remained in the dark since Hurricane Maria.
AP Photo/Carlos Giusti, File

SAN JUAN, Puerto Rico (AP) — Puerto Rico's governor named a new CEO on Wednesday to lead the U.S. territory's power company, which has now seen three top executives in two weeks as it struggles with a lack of leadership, bankruptcy and the restoration of electricity to hundreds who remain in the dark since Hurricane Maria.

Electrical engineer Jose Ortiz, who once served as executive director of the island's water and sewer company, takes over the Puerto Rico Electric Power Authority on July 23. He replaces a CEO who lasted only one day in the position and took over from another CEO who announced his resignation last week after nearly four months on the job.

Ortiz once served as president of the power company's board, which saw five members resign last week following an outcry over the $750,000 annual salary that a previous CEO would have earned amid an 11-year recession. Ortiz will be making $250,000 annually and will receive no bonuses.

Ortiz said his priority is to rebuild Puerto Rico's credibility to help attract foreign investment and reach a deal with creditors to resolve the agency's $9 billion public debt.

"One of the first things we have to do is pull the company out of bankruptcy," he said.

He also said he will review multimillion-dollar federal contracts awarded to U.S. companies who are helping restore and rebuild the island's electrical grid after the Category 4 storm destroyed up to 75 percent of transmission lines.

Ortiz promised that Puerto Ricans will see "substantial change" early next year at the power company and in their bills as the government prepares to privatize the generation of energy and award concessions for transmission and distribution.

"We cannot keep planning much further," he said. "We all know what needs to be done."

Gov. Ricardo Rossello is among those who have been blamed for the ongoing turmoil at the power company. A day after the previous CEO was appointed last week, he issued a statement saying that the $750,000 salary was not appropriate given the island's economic crisis and said that any board member who disagreed should step down. Five of them did, including the CEO who was previously part of the board.

Rossello defended his actions, saying energy "is the linchpin of our society."

"The transformation of the electrical system is critical to Puerto Rico's development," he said.

Ortiz takes over as crews try to restore power to about 650 customers who remain without electricity some 10 months after hurricanes Irma and Maria devastated the island in September.