It wants the new command headquarters to be close to academia and industry. 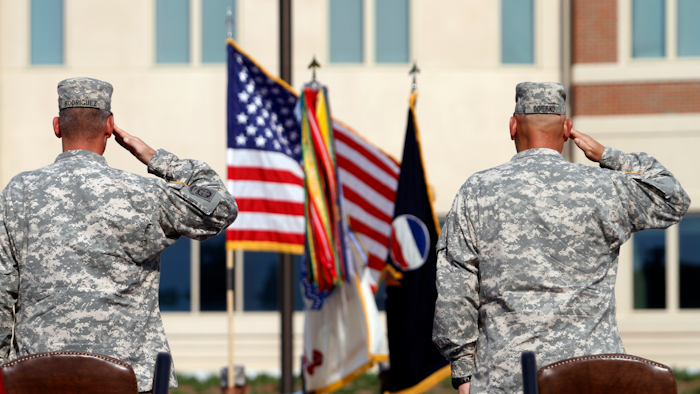 In this Sept. 12, 2011 file photo, generals salute during an installation ceremony at the U.S Army Forces Command at Fort Bragg, N.C., one the Army's three major command headquarters. The Army is scouting large cities in 2018 to find a home for a fourth command headquarters, one that would be near experts in technology and innovation who can help focus on the Army's future. The site is expected to be announced by the end of June 2018.
AP Photo/Jim R. Bounds, File

The U.S. Army is scouting large cities to find a home for a new command headquarters so it will be close to academia and industry, a first for the service.

The Army typically likes to put its facilities away from population centers because there is space to train in rural areas and operations won't disrupt the public.

The new command will focus on what the Army of the future should look like. The Army wants to be near experts in technology and innovation who can help figure that out.

Army officials asked mayors for input, and then chose finalists. They haven't announced which cities made the cut but are now visiting the finalists to recommend a site to the Army secretary. They've been to Boston, Raleigh and Austin so far.

The site for the Futures Command headquarters is expected to be announced by the end of June.

"We're looking at the best of what America has to offer when it comes to technology and industry and education," said Army Col. Patrick Seiber, spokesman for the Army Futures Command Task Force. "That means we need to get to where these folks are."

Some questions and answers about the Army's quest:

What Will the New HQ Do?

The wars in Iraq and Afghanistan have been so demanding, Army officials say they haven't planned enough for how they will fight wars years from now. Army Secretary Mark Esper has said, "The present has consumed the future."

The Futures Command will have a staff of roughly 500 people, led by a four-star general. It will try to figure out what the emerging threats are, what equipment will be needed and how to use it. It will help the Army get the right equipment quickly and propose changes to war-fighting strategies.

"We can't try to win the next war using the last war's equipment and tactics," Seiber said.

The Army has been discussing ways to modernize for several years. It proposed a study in October to establish a new command.

Adding a fourth major command is the biggest change to the Army's structure in decades.

Where Could It Go?

Boston, Raleigh and Austin are among the finalists selected from the top 15. The Army hasn't said publicly how many finalists there are. The process is designed to give each city the same amount of time to prepare for a visit.

The Army is looking for a location that's close to the best talent in academia and industry. It's also considering where people want to live and how much money is spent in each city on research and development, among other factors.

Why Would a City Want It?

Jobs, economic activity and a bond with the Army. Some of the staff will be hired locally. Employees will live near the headquarters and presumably spend money in the area.

The Army will lease a large office space and will likely spend millions on the project. The exact figure will be determined by costs in the city that is selected. The Army is also factoring in the cost of security in a downtown area.

The goal is to open it by next summer, but the schedule depends on how much renovation the office space needs.

No other major city has an Army command like this downtown.

How Are the Cities Making Their Case for It?

The Associated Press asked the cities about their pitches. They are telling the Army about their top universities and skilled workers. Some are stressing their proximity to existing military facilities and easy access to transportation.

Dallas Mayor Michael Rawlings says his city offers the workforce, research institutions, infrastructure and quality of life for the Futures Command to thrive. In Austin, there are many entrepreneurs, college students and military reservists who could offer the command new ideas, according to the Greater Austin Chamber of Commerce.

Los Angeles thinks the Army will be enticed by its economy centered on innovation, its top schools and its investments in transportation infrastructure, said Anna Bahr, a spokeswoman for the mayor. Philadelphia thinks its proximity to Washington and several military posts, its international airport and regional trains, and a highly educated and diverse workforce will be a draw, said city spokeswoman Deana Gamble.

New York City's recent investments in cybersecurity, urban tech and innovative technologies align with the vision for the command, according to the city. Denver touts a high concentration of tech workers, plus a culture that's enticing tech businesses to locate there.

Some cities are not commenting publicly on the project, including Raleigh and Houston.

The Army's other major commands are in rural areas: Fort Bragg in North Carolina, Fort Eustis in Virginia and Redstone Arsenal in Alabama.