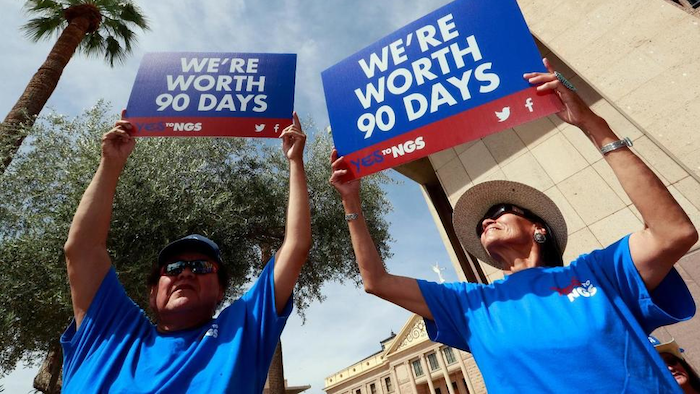 Roger Parrish and Diane Johnson, right, rally outside the Capitol in Phoenix, Wednesday, June 6, 2018. Hundreds of Navajo Generating Station employees, relatives and union and tribal leaders rallied at the state Capitol in Phoenix on Wednesday to request a 90-day pause in steps to close the coal-fueled plant by the end of 2019 as scheduled.
AP Photo/Matt York

PHOENIX (AP) — More than 300 people who say their livelihoods depend on a coal-fired plant on a sprawling Native American reservation rallied in Phoenix Wednesday to request a 90-day delay in steps being taken to shutter it by 2019.

Demonstrators — including miners who extract the coal that fires the plant, plant employees, their relatives and tribal and union leaders — asked for more time to allow a potential buyer of the Navajo Generating Station in northern Arizona to work out the details of a purchase they said would save jobs and a major source of funding for the Navajo Nation and Hopi Tribe.

The power-generating plant is owned by several utility companies including its operator the Salt River Project, which owns 42.9 percent and controls another 24.3 percent on behalf of the U.S. government. The utilities decided early this year to shut the plant down when its lease expires and use cheaper power sources.

"We don't think that 90 days is too much to ask," Clark Tenakhongva, the Hopi Tribe's vice chairman, told the group. He said that 85 percent of the tribe's operating budget revenues come from the generating plant.

Added Navajo Nation President Russell Begaye: "We should continue to work to find solutions to keep the plant operating while supporting both the Navajo economy and families."

The board of the Central Arizona Water Conservation District is to consider alternative power sources to the generating station during a Thursday meeting. The district uses power from the plant to operate an aqueduct system.

It was the latest effort by employees of the 2,250-megawatt station to save their jobs. The plant's sole coal supplier, Peabody, has hired an investment banking firm to find a new owner for the station and the Kayenta Mine that supplies the plant with coal. Demonstrators were heartened by news that a Chicago-based company called Middle River Power has expressed interest.

While supporters of the plant insist it can produce economically priced energy, utility operators say the station is more expensive to run than natural gas-burning plants.

Jolene Bitsui, a 42-year-old single mother of four grown children who services heavy machinery at the coal mine, said her job has allowed her family to continue living on the Navajo reservation. "Closing the plant and the mine will take away hundreds of jobs from Navajos and Hopis, and these are good jobs," she said.

"There really isn't any other business out there, any employer out by the reservation," said Floyd Singer, a 67-year-old member of the Hopi Tribe who made the five-hour trip to Phoenix with his son and three grandchildren.

The Hopi Tribe and coal mining groups last month sued the operator of an Arizona aqueduct system known as the Central Arizona Project to halt the plant's closure when its lease expires near the end of next year.

The lawsuit in U.S. District Court contends that federal law obligates the district to buy power from the station. A recent letter from the Interior Department raised the question of whether a 1968 federal act that obligated purchase of electricity from the station should be considered when deciding its future. Congress constructed the station rather than build two dams on the Colorado River for hydroelectricity so Arizona could move its water.

Middle River Power, a portfolio company of Avenue Capital responsible for managing its power plant investments, said in a May 2 letter to the water conservation district's board president that it was discussing a possible plan for the station's future with the plant's operator and owners and federal and tribal officials.

"We are immediately advancing discussions with the existing non-federal owners, tribal leadership and other stakeholders to discuss next steps for a functional transition to new ownership," wrote Mark Kubow, Middle River Power's president. Company officials did not immediately respond to a request for more details.

The Salt River Project, a utility that operates the generating station, said Tuesday there is no deal.

Salt River Project spokeswoman Scott Harelson said the station's owners decided to end its participation in the plant because coal generation cost so much and they had "not received an offer or entered into negotiations with any potentially interested party" to buy it.

The Central Arizona Project, run by the Central Arizona Water Conservation District, is a primary customer of the plant, using the power to move water to residents and businesses in the state's Maricopa, Pinal and Pima counties. The plant also provides electrical service to other customers in Arizona and parts of Nevada.