Germany to Spend Up To $44B Ditching Coal

In January, a government-appointed panel recommended Germany stop burning coal to generate electricity by 2038 at the latest. 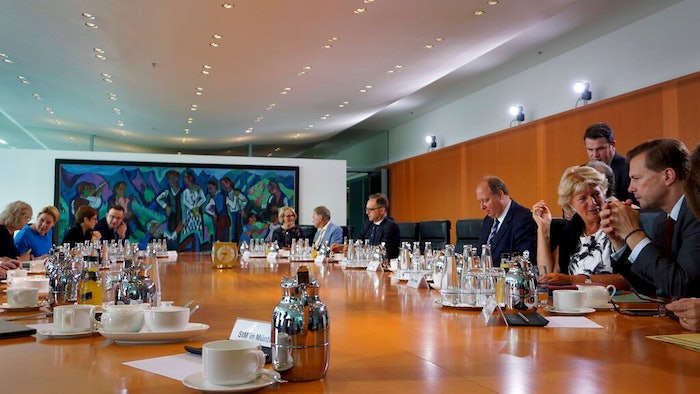 Members of the cabinet talk prior to the weekly cabinet meeting at the Chancellery in Berlin, Germany, Wednesday, Aug. 28, 2019.
AP Photo/Michael Sohn

BERLIN (AP) — Germany's Cabinet on Wednesday approved a plan to spend up to 40 billion euros ($44.4 billion) by 2038 to cushion the impact of abandoning coal on mining regions.

Economy Minister Peter Altmaier said funds will start flowing once parliament has passed separate legislation setting out the dates and terms of Germany's exit from coal, likely in the coming months. The money will be used to finance projects such as expanding broadband access and transport infrastructure, and locating research institutes and federal authorities in the affected regions.

In January, a government-appointed panel recommended Germany stop burning coal to generate electricity by 2038 at the latest, as part of efforts to curb climate change. Germany gets more than a third of its electricity from burning coal, generating large amounts of greenhouse gases that contribute to global warming.

The opposition Greens questioned the timing, given that there is no detailed plan yet for Germany's exit from coal. The plan is expected this fall.

"Just dispensing billions a few days before the state elections in Brandenburg and Saxony without at the same time approving the exit from coal doesn't bring planning security," party co-leader Annalena Baerbock said. "It leads to further uncertainty."

A small part of the money will go to areas with black coal-fired power stations.

Altmaier said the government is putting together an overall coal package "that gives the regions hope, that gives people prospects, that shows we are leaving no one on their own and that the federal government is aware of its responsibility."

Coal Company Tries to Save Plant

Coal Plant Expected to Shut Down by 2025