It blew a gaping hole in the grain elevator and forced authorities to evacuate nearby homes. 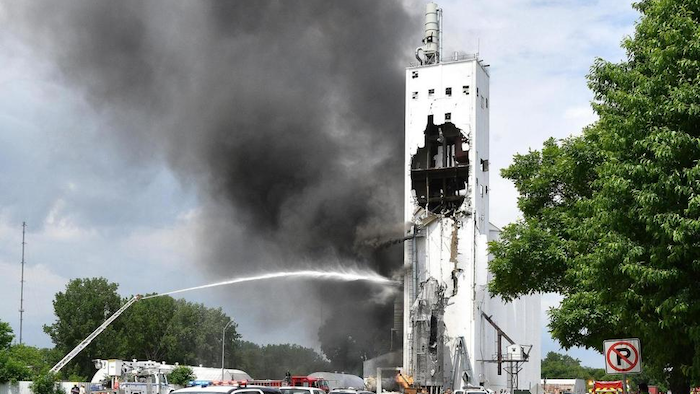 Emergency workers respond to the scene of a grain elevator explosion and fire near the intersection 4th Avenue and West 24th Street in South Sioux City, Neb., Tuesday, May 29, 2018.
Tim Hynds/Sioux City Journal via AP

SOUTH SIOUX CITY, Neb. (AP) — At least two people were injured in an explosion Tuesday that blew a gaping hole in a northeast Nebraska grain elevator and forced authorities to evacuate nearby homes.

The explosion was reported just before 1 p.m. at Anderson Farms in South Sioux City. Three people were in the plant, and one person with burns was taken to an area hospital. Another was injured but did not go to the hospital.

A dispatcher for the department said police plan to share more information in a press release.

Neighbor Brayden Logan said he heard a loud boom from inside his home about four blocks away.

"We heard a huge crash and it shook our whole house, and then a couple of minutes after that we heard all the sirens," he told the Sioux City Journal .

Authorities are still investigating the cause of the explosion.

Judd Jager, the owner of Industrial Diversified Inc., was standing outside his business two blocks south of the elevator and witnessed two large blasts and a fireball.

"The first explosion came out of the top piece" of the elevator, Jager said. "The second came about a couple seconds later. That was big. That's what took the walls out."