The blue jeans, which failed to sell at auction in 2016, now have a new owner somewhere in Southeast Asia. 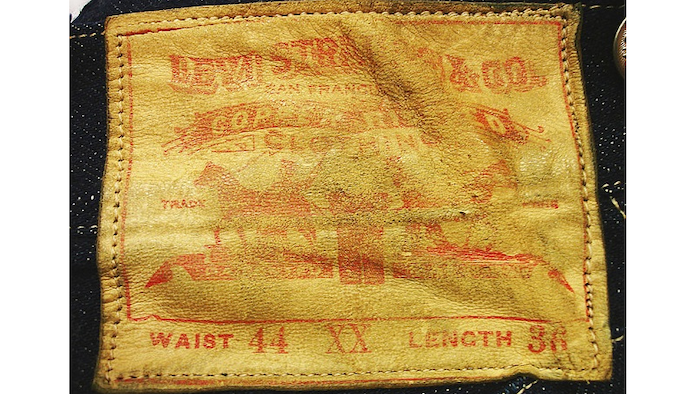 This undated photo provided by Daniel Buck Auctions, of Lisbon Falls, Maine, shows a label on a pair of 125-year-old Levi Strauss & Co., denim blue jeans that sold for nearly $100,000 this in May 2018 to a buyer in Asia. The jeans were purchased in 1893 by a store keeper in the Arizona Territory and were in pristine condition because they were worn only a few times.
Daniel Buck Soules/Daniel Buck Auctions via AP

PORTLAND, Maine (AP) — A buyer with a penchant for vintage denim has plunked down nearly $100,000 for a pair of truly vintage jeans that come from the American Old West.

The 125-year-old Levi Strauss & Co. blue jeans, which failed to sell at auction in 2016, now have a new owner somewhere in Southeast Asia.

"It's somebody who loves old Levis," said Daniel Buck Soules from Daniel Buck Auctions, who worked for 11 years on public television's "Antiques Roadshow."

The price puts it near record territory for old Levis. But the private sale agreement prevents Soules from disclosing the exact price or the buyer's location, he said. The buyer sent a representative to Maine to inspect the jeans before buying them on May 15, he said.

There's no mystery behind the jeans.

They were purchased in 1893 by Solomon Warner, a storekeeper in the Arizona Territory. Warner was a colorful character who established one of the first stores selling American dry goods in Tucson and survived being shot by Apache Indians in 1870.

The denim was produced at a mill in New Hampshire, and the jeans were manufactured by Levi's in San Francisco. Unlike modern Levis, the jeans in those days had only a single back pocket. There were no belt loops because men used suspenders back then.

The denim befits a larger-than-life character. The cotton jeans, with button fly, had a size 44 waist and 36-inch inseam, suggesting Warner was not a small man.

They'd been stored for decades in a trunk and were in pristine condition because Warner wore them only a few times before falling ill, Soules said.

Soules put the jeans up for auction in 2016, but a computer glitch botched the online bidding. Then the owner decided to go the private-sale route, he said.

There's a market for rare jeans.