A 48-year-old woman drowned as Hurricane Harvey floodwaters rushed through the hotel where she worked. 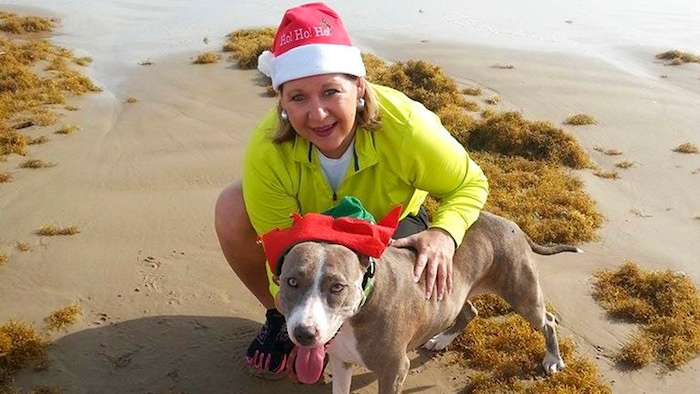 The civil lawsuit filed Monday, June 4, 2018, in district court in Dallas against Omni Hotels and Resorts and Otis Elevators reveals new details of what happened in the moments leading up to Jill Renick’s drowning.
Courtesy of the Renick family via AP

DALLAS (AP) — A woman whose body was found 11 days after she made a frantic cellphone call from a Houston hotel elevator as floodwaters from Hurricane Harvey rushed in exited the elevator in the basement only to struggle against a strong waist-high current strewn with debris, a lawsuit filed Monday says.

Jill Renick's family filed a civil lawsuit in district court in Dallas, saying there wasn't proper planning for flooding at the Omni Houston Hotel, where Renick worked and where flooding had occurred before. The lawsuit, which lists Omni Hotels and Resorts and Otis Elevator Company among the defendants, reveals new details of what happened in the moments leading up to the drowning of 48-year-old Renick.

Renick "suffered a terrifying and horrific death" that was "unnecessary and easily preventable," according to the lawsuit.

"It's just inexcusable for a hotel operation of this size to be that irresponsible," said Rob Crain, the lead attorney for the family.

The fate of Renick, who was the director of spa services at the hotel, was one of the most perplexing mysteries that came out of Harvey's devastating flooding. She disappeared in the early morning hours of Aug. 27 as floodwaters inundated Houston. Her body was finally discovered on Sept. 7 in the ceiling of the hotel's basement.

"I don't want this to happen to anybody again — employee or guest," said Renick's sister, Pam Eslinger.

Renick, who spent the night with her dog in a room on the hotel's third floor, was called by a staffer around 5:15 a.m. on Aug. 27 and told to "come downstairs," Crain said.

"She was not given any indication that anything was remiss or dangerous for her to go downstairs," Crain said, adding, "There was not a coordinated plan that was being implemented."

About 5:40 a.m., Renick made the call for help. The lawsuit says that according to the hotel, Renick said she was trapped in the basement service elevator and water was coming in. The lawsuit also says Renick "was heard screaming and clamoring for help by people on the first floor."

The lawsuit notes that the third floor, where she was staying, doesn't have access to the service elevator so she would have likely had to access it from the first or second floors.

According to the lawsuit, she was somehow able to exit the elevator into the basement. Video footage provided by the hotel to her family's attorneys shows her coming from the area of the service elevator at 5:44 a.m.

"We see her going against the flow of the floodwaters. We also see her shortly thereafter coming back with the flow of the water," said Crain, who added, "It is clearly somebody who is trying to find a way out of this horribly terrifying condition."

The video ends at 5:45 a.m. and Renick isn't seen alive again. "She desperately searched for a way out before climbing above the ceiling tiles and ceiling joists for the last pockets of air," says the lawsuit, which adds that floodwaters eventually rose to the hotel's first floor.

The lawsuit says that before Renick was called in her room it was known that the basement and elevator shafts were flooding, noting that in that time period, people who appear to be hotel employees can be seen on the video walking through the accumulating water in the basement.

The hotel, located near the Buffalo Bayou, has a history of flooding and is located in a flood plain, according to the lawsuit.

The lawsuit also alleges that Otis Elevator, which had a contract with the hotel to maintain and service the elevators, should've installed flood sensors and warned users of the dangers of operating an elevator in flooding.

Spokeswomen for both Omni and Otis said they don't comment on pending litigation.

The Occupational Safety and Health Administration in February fined the hotel for a violation, saying that the elevators being kept operational during flooding exposed employees to drowning.

The hotel is currently undergoing a $30 million renovation and is set to reopen in November.

Eslinger described her sister as the kind of person who "everybody gravitated to."

"She was wonderful and she's missed terribly every day," Eslinger said.

Oil Cos. Leak Chemicals During Harvey