Bayer Unloads $9B in Ag Businesses Before Monsanto Merger

Antitrust regulators at the Justice Department say it's the biggest divestiture ever required for a merger. 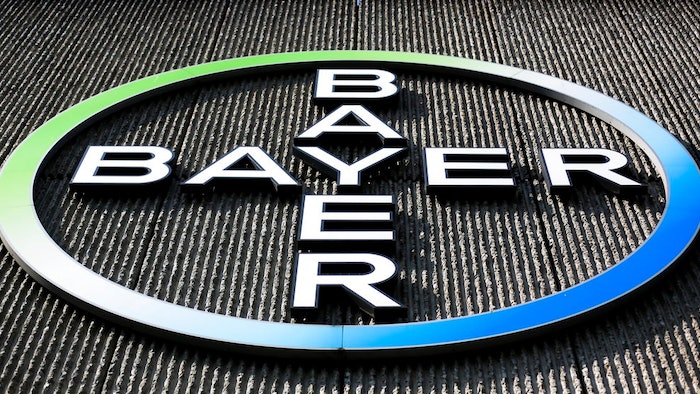 This Monday, May 23, 2016, file photo, shows the Bayer AG corporate logo displayed on a building of the German drug and chemicals company in Berlin. The German pharmaceutical giant has agreed, Tuesday, May 29, 2018, to the U.S. government's demand that it sell about $9 billion in agriculture businesses as condition for acquiring Monsanto Co., a U.S. seed and weed-killer maker.
AP Photo/Markus Schreiber, File

WASHINGTON (AP) — German pharmaceutical giant Bayer AG has agreed to the U.S. government's demand that it sell about $9 billion in agriculture businesses as the condition for acquiring Monsanto Co., a U.S. seed and weed-killer maker.

Antitrust regulators at the Justice Department say it's the biggest divestiture ever required for a merger. The regulators say they directed Bayer to divest assets such as vegetable oils, seeds and seed treatments to ensure fair competition and prevent price spikes after the massive agriculture business deal goes through. The assets will be sold to BASF, a German chemical company.

"As a result, American farmers and consumers will continue to benefit from competition in this industry," the Justice Department said in a statement.

Without the sale of Bayer assets, the merger of two of the world's largest agricultural companies "would likely result in higher prices, lower quality and fewer choices across a wide array of seed and crop-protection products," the statement said. "The merger also threatened to stifle the innovation in agricultural technologies that has delivered significant benefits to American farmers and consumers."

Bayer's $57 billion proposed takeover of Monsanto has been watched by competitors and environmental groups, which are fearful that the number of players in the business of selling seeds and pesticides will shrink further and give a single company a stranglehold on the food chain.

Monsanto, based in St. Louis, is one of the world's biggest seed companies. The merger would make Bayer the largest supplier in the world of pesticides and seeds for farmers.

"This merger is going to have a devastating effect on African American farmers and other small farmers," John Boyd, founder and president of the National Black Farmers Association, said in a telephone interview. "It means higher prices for small farmers, and more black farmers will end up going out of business due to these higher seed prices."

The divestiture proposal will be filed in federal court and opened to public comment for 60 days.

In March, the European Union approved the merger on condition that Bayer sell $7.4 billion in assets to BASF to eliminate overlaps in seed and pesticide markets. The U.S. Justice Department said after the European action that it continued to have concerns over the proposed deal, especially its potential impact on American farmers and consumers, which could differ from its effects in Europe. Genetically modified seeds, for example, are used widely in the U.S. but mostly banned in Europe.

Under the new U.S. agreement, Bayer must divest:

— Businesses that compete with Monsanto, including its cotton, canola, soybean and vegetable seed businesses, and its Liberty herbicide business, a key rival of Monsanto's well-known Roundup herbicide.

— Assets needed to ensure that BASF has the same incentives to innovate that Bayer would have as an independent competitor, including Bayer's early stage "digital agriculture" business.

The merger also has won approval from China, Brazil and Australia.

Bayer said it has now secured nearly all the needed government clearances for closing the deal.

"Receipt of the (Justice Department's) approval brings us close to our goal of creating a leading company in agriculture," Bayer CEO Werner Baumann said in a statement. "We want to help farmers across the world grow more nutritious food in a more sustainable way."

Some antitrust experts had warned that the merger would eliminate direct competition between two of the biggest players in the seed industry, giving the new company lopsided control over U.S. cotton acreage, and commercial seed development for canola, soybean and corn.