Small Businesses: 'If I Could Do It Over...'

Probably every small business owner would handle some things differently the next time. 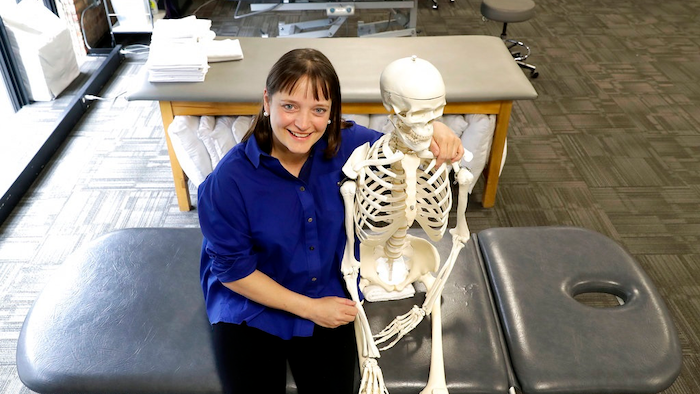 n this Saturday, May 12, 2018, photo, April Oury, owner of Body Gears physical therapy center poses for a portrait with her instructional skeleton in Chicago. Oury started her physical therapy practice 14 years ago wanting to give all aspects of her business the same focus and attention to detail she gave patients, even when it came to choosing paint colors or an internet provider. She wouldn’t do it that way again. “There was not enough time in the day or the workweek to put that kind of effort into every single thing,” says Oury.
AP Photo/Charles Rex Arbogast

NEW YORK (AP) — April Oury started her physical therapy practice 14 years ago wanting to give all aspects of her business the same focus and attention to detail she gave patients — even when it came to choosing paint colors or an internet provider.

She wouldn't do it that way again. "There was not enough time in the day or the workweek to put that kind of effort into every single thing," says Oury, owner of eight Body Gears physical therapy centers in the Chicago area, San Diego and Clayton, Missouri.

Probably every small business owner would handle some things differently the next time. Learning from experience is part of starting and running a business, and the list of things owners wish they could do over is likely endless.

Oury gave up her drive for ultra-perfection when she realized it prevented her from getting things done. While she fixated on the details of a marketing brochure, "I missed all those opportunities to pass out a brochure because I didn't have it in my hands."

What others would change if they had the chance:

WHAT'S IN A NAME?

Andy Curry came up with what he thought was a unique name, WallaZoom, for an app he created over a year ago to help shoppers find local retailers. When he went to trademark it four months ago, he learned it was in the process of being trademarked by someone else. He hadn't checked beforehand.

"I didn't think there would be a chance of anyone else using that name in the trademark category of advertising and marketing," says Curry, who's located in Colorado Springs, Colorado. He still hopes to get the name, but also has backups in case he can't.

Levi King's problem was a name no one could spell or pronounce. Six years ago, he and partner Caton Hanson founded Creditera, which helps businesses get loans and other credit. Soon after, the Draper, Utah-based company was being called names like "Credit Tiara" and frequently misspelled.

"Something as important as a brand and we took so little time to check it out — we should have run it by other people," King says. Eventually, he and Hanson found another name, Nav, referring to how the company assists businesses navigating credit applications.

Hope & Harmony Farms, a brand of peanuts, started out as Royal Oak Peanuts in 2002. Sales didn't take off the way co-owner Stephanie Pope and her partners hoped. When they did an informal survey, "one close friend even said the name almost sounded like a cemetery," she recalls.

The Drewryville, Virginia, company's owners came up with Hope & Harmony Farms in 2012, and sales are up 50 percent since then.

Jill Caren charged her web design clients a flat fee of $1,500 no matter how much work she did or how complex it was. She ended up working too many hours and not making enough money.

"I learned the hard way that low pricing is not the way to get quality business," says Caren, owner of 2 Dogs Media, based in Marlboro, New Jersey. Her low prices tended to attract clients who were difficult and disrespectful. When she started charging based on what each job required, she got to spend more time with her family and got clients who appreciated her more.

Vladimir Gendelman worried about running out of money when he started his printing business in 2003. He had $50,000 in credit, but for five years he built Company Folders very slowly. Revenue was under $20,000 the first two years. It accelerated gradually and by 2008 reached $525,000.

"If I could do it all again, I would spend the money faster so that I could create a better baseline to generate revenue sooner," says Gendelman, whose company is based in Pontiac, Michigan. "This means everything from building my website faster to hiring my first employee, which is something I waited five years to do instead of making that hire right away."

Nick Glassett spent about half of 2017 in what he calls "paralysis by analysis." Glassett, who runs a website called Origin Leadership that aims to teach management skills, says he wasted time tinkering with details and second-guessing himself.

"It was scary to be trying something new, but I let that fear get to me," says Glassett, who lives in New Orleans.

When he finally decided to get the site up and running, it had 150 daily visitors within two months.

WHO IS YOUR CUSTOMER?

BeenVerified.com, which helps people carry out background checks, didn't do any market research or come up with a plan to target specific customers. Its marketing campaigns advertised the website's features, not how it could benefit users. Over the first two years, it had barely any revenue, co-founder Ross Cohen says.

"You end up marketing this broad message and we found we were really talking to nobody," says Cohen, whose company is based in New York. After BeenVerified.com began explaining how it could help users, the company went from annual revenue of a few hundred thousand dollars to $15 million in two years.

When Logan Soya began marketing Aquicore, software that monitors buildings' energy usage, he and his sales staff made their pitches to property managers and building engineers who said, "'Great, but I don't have the budget for this. I have to wait for next year,'" Soya says.

It took more than a year of these responses for Soya, whose company is based in Washington, D.C., to realize he should be selling to building owners who set the budgets.

"Once we understood the problem, it was not that heavy a lift," he says.