Economists say that even if a company has benefited from one policy, it might be hurt by another. 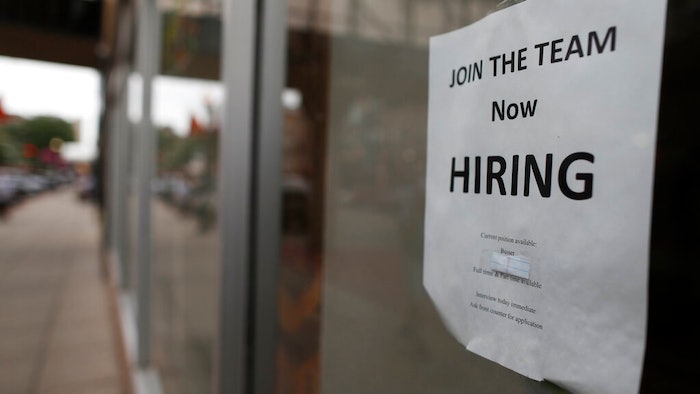 In this July 18, 2018, file photo a "now hiring" sign hangs in the window of a Chinese restaurant in downtown Fargo, N.D. Small business hiring is slowing, according to numbers released by payroll provider ADP.
AP Photo/David Zalubowski

NEW YORK (AP) — As Small Business Week approaches, the nation's smallest companies in the aggregate are by many accounts doing fairly well. They're not, however, thriving en masse in direct response to Trump administration and Republican policies.

Small business hiring is erratic, according to numbers released by payroll provider ADP. Small businesses typically struggle to add jobs when the unemployment rate is very low, as it is now, at 3.8%. They often can't pay as much as larger companies or offer the comparatively robust benefits that big companies do, thereby leaving them at a disadvantage when workers are scarce.

Meanwhile, surveys by Bank of America, Wells Fargo, Capital One and the U.S. Chamber of Commerce and MetLife show small business owners have been losing some of their optimism as doubts linger about the strength of the current economic expansion. The new tax law has had a mixed impact on small businesses and the trade war that began with Trump administration tariffs is hurting small manufacturers and retailers.

"Business is good, OK, but no different from how it's been throughout the bulk of this expansion," says Mark Zandi, chief economist with Moody's Analytics. "It's hard to argue that the president's policies have led to some kind of renaissance for small businesses that's going to mean great things forever."

The administration believes otherwise. Former Small Business Administrator Linda McMahon, in an opinion piece published last week on FoxBusiness.com, credited the administration's policies for helping the economy and in turn, small companies. She noted that she met with small business owners throughout her SBA tenure.

"I don't need a spreadsheet to tell me the president's America first program of tax, trade, regulatory and energy reform is supercharging our economy," says McMahon, who resigned last month to work on President Donald Trump's re-election campaign. "I saw it and continue to see it with my own eyes — and through the eyes of the hundreds of business leaders I have met."

In a letter released last month by the SBA, Mid-Atlantic Regional Administrator Michelle Christian said, "we see small business owners taking advantage of the tax cuts and deregulation efforts led by President Trump to invest in their companies and their employees by raising wages, providing bonuses, increasing benefits, and creating more jobs. The economy is strong, and small businesses are thriving."

Economists and industry group officials see administration and GOP policies as having a mixed impact on small businesses — how a company is affected depends on the policy and the business's individual circumstances. But even if a company has benefited from one policy, it might be hurt by another.

"It's been one step forward and one step back," says David French, senior vice president of government relations at the industry group National Retail Federation. "A lot of the positive gains we've seen out of tax reform have been given back in lost sales and lost opportunities because of higher tariffs."

The administration's tariffs on hundreds of billions of dollars of Chinese and European products have sent costs higher for small businesses including manufacturers and retailers.

It can be a mistake to generalize about the companies that will be the focus of National Small Business Week May 5-11. The expression "small business" is used to describe companies with relatively few employees and small revenues compared to large companies with thousands of workers and hundreds of millions or billions of dollars coming in annually. But there is no typical small business — a retailer, dry cleaner, restaurant, manufacturer, dental office or auto mechanic can be a small business. Because these companies have vastly different structures, products and services, they have widely divergent needs and priorities, and government policies have a varying impact on them.

The tax law has had an uneven impact. Not all sole proprietors, partners and owners of what are called S corporations can take a new 20% deduction against their business income; the provision excludes some industries and depends on filing status. For example, an owner of a small business whose spouse had high earnings from a job or other source might not qualify for the deduction. Nor could many people with professional practices such as doctors, architects and consultants. And while the law lowered the maximum corporate tax rate to 21% from 35%, the rate went up for many small corporations.

Under the previous tax law, Sandra Payne's construction equipment manufacturer had a 15% tax rate on the first $50,000 in income. Under the new law, that rose to 21%.

Michael Rogers estimates he saved about $3,100 in taxes because he was able to claim the 20% deduction for what's known as qualified business income from his Cleveland, Tennessee, real estate company, Chandler Properties. But the money won't be reinvested in his business; it will go to Rogers' family of four children.

Overall, it appears the tax law didn't help small businesses as much as the GOP predicted. In a Bank of America survey of 1,504 small business owners released last week, 28% said the government's tax policy has been positive for their companies, down from the 45% who predicted a year ago it would be positive for them. Half said it was neutral, up from 39%, and 21% said the policy was negative for their companies, up from 15%.

Meanwhile, although Trump contends his trade policy is helping business, billions of dollars in taxes on Chinese and European imports and retaliatory tariffs on U.S. goods have driven up prices for small companies and their customers. In the Federal Reserve's most recent Beige Book, its assessment of regional economies, eight of the 12 regional Fed banks reported businesses were affected by or concerned about tariffs that run as high as 25% on some products. While the April 17 report did not identify any of the companies as small businesses, it does show tariffs are an ongoing issue.

The tariffs are also negating some tax benefits under the new law, the NRF's French says.

In a report released by the Federal Reserve Bank of San Francisco in February, researchers found that tariffs already in place on Chinese imports have added 0.1 percentage point to consumer price inflation, a relatively small amount, and that the contribution of Chinese imports to overall personal consumption and business investment are also small. However, the report said, "when faced with tariffs as high as 25% on a broad set of product categories, even these small shares can lead to sizable upward pressures on prices."

Payne's company, which uses steel and other raw materials that have been hit by tariffs, is paying higher prices to suppliers.

"All of our vendors are getting ready or have already increased prices in anticipation of the tariff issues," she says.

The U.S. economy grew at a solid 3.2% in the first three months of the year, but economists don't expect the current April-June quarter to match that performance. Many are looking for gross domestic product growth to slow to around an annual rate of 2% in the current quarter. A weakening economy can lead to a drop in hiring, which has been inconsistent at small businesses. While ADP counted 77,000 new small business jobs in April and 20,000 in March, that compared to an average 52,000 per month in 2018. Although many businesses say they're unable to find skilled workers — a problem Zandi says is exacerbated by the administration's immigration policies — some business owners have said they're cautious about taking on the added expense of new hires.